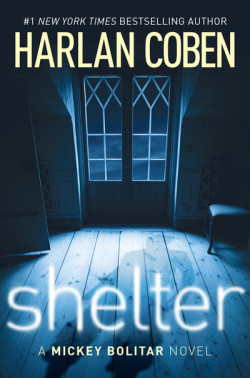 Published: 2011, September by Orion
Genre: mystery, thriller Age: 14+
Synopsis: The first in an exciting series of young adult thrillers from the master of the hook-and-twist.
Watch the book trailer

Just when Mickey’s parents decide to return to the US, a tragedy happens. His father is separated from him by an uncrossable barrier- death. His mum falls to drugs, and Mickey is left to live with his uncle whilst his mum completes rehab. Things aren’t going easy. But the new school sounds promising; here he can make friends for longer than the few months he always had travelling the world. Settling down sounds like a good plan. But when Ashley, his girlfriend, disappears without a trace, Mickey knows things are up…

Harlal Coben’s books are published in “over forty languages, and there are more than 47 million of his novels in print worldwide”- at least, that’s what the author information claims. And I wouldn’t be surprised if that’s true; Shelter is has everything a good thriller/mystery needs, and more.

Shelter kicks off to a good start when it tells us of the mysterious Bat Lady- an old woman who supposedly lives in a dilapidated house on Mickey’s street and does strange things to children. And whilst this sounds pretty average for a book with a cover as spooky as Shelter‘s, Coben still managed to scare the guts out of me. In fact, the entire first half of the novel is almost a paranormal-mystery, with eerie goings-on and a chilling break-in into Bat Lady’s strange house. This soon changes, and towards the end we’re treated to a far more gritty, urban thriller with flesh, blood, and guts. Almost better than the chilling first 100 pages, Coben doesn’t shy away from violence and there are plenty of wince-worthy fights.

As for the characters, well, they’re good. Mickey is suitably sentimental about his father without being too teary. Arriving in a new area and school has allowed him to make some interesting new friends: Ema, Spoon, and Ashley, his kind-of-girlfriend-but-not (who disappears early on). Mickey is easy to relate to and is a good solid character that manages to support the story well. Ema, “the fat emo”, is by far the best character of the novel, shrugging off Mickey’s apparent attempts to be nice to her because she’s the outcast. She’s sassy and clever, but still self-consious and insecure, making for an intriguing mix of emotions. Spoon is little more than a necessary filler who spouts random facts, and as for Ashley, well, she barely makes an appearance- though this is all part of the story.

Harlan Coben is an excellent plotter, taking us on a fantastic journey. There are plenty of plot twists to keep the reader entertained, and the ending is thoroughly unpredictable. This is possibly Shelter‘s strongest selling point: its unexpected twists and turns.

Shelter is fantastically plotted, and is almost two books rolled into one fantastic novel- a gritty, urban novel and a chilling supernatural tale. Coben’s characters are good and relatable, though Mickey is perhaps a little weaker than he should be. If you’re looking for a great thriller/mystery, then Shelter has a lot to offer: it is clear that Harlan Coben is a veteran writer.

EDIT: The original posting of this review contained a paragraph about a particular plot point which I couldn’t make sense of. However, having tweeted with the author himself, I realise this is not a mistake but a purposeful part of the novel. Clearly I wasn’t the brightest spark whilst reading Shelter!

More in the Micky Bolitar: