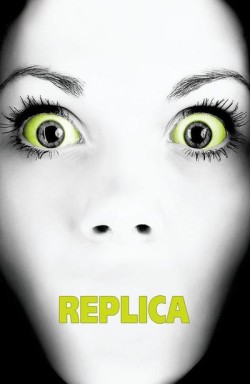 Published: by Oxford University Press
Genre: action, LGBT, thriller Age: 12+
Synopsis: '"Whose body is that on the table?' I ask. She stares at me, as though the answer is obvious. 'It's yours,' she says. Before I have time to scream, she types a command on the keyboard. My consciousness whirls away like storm water down a drain." Chloe wakes up to find all her memories have been wiped. And the only person who knows what happened is a teenage girl who looks and sounds exactly like her. Who is she? And what does she want? Chloe is running out of time to discover the truth. But she's in even more danger than she realizes, and nothing is as it seems . . .

Replica is Heath’s first young adult novel, and in a similar vein to his middle grade work,  Replica employs a similarly surreal – if that’s the right word – conclusion. It’s something that works in his writing for younger ages, where suspension of disbelief is more easily pushed by child protagonists – but here, amongst the (almost) realistic world of quantum mechanical processors (QMPs) and corrupt military contractors, Heath’s final note strikes an absurd and frankly laughable note. It’s a shame, given that Heath successfully manages to play with notions of human-real robots or replicas, in a way that is reminiscent of I, Robot.

Although Replica delivers one or two shock moments, it’s disappointing how much of the essential plot is predictable. Once it moves away from the brilliant first chapter and the fog starts to lift from the story, it seems almost banal how easy it is to correctly speculate on the whereabouts of the sought after QMP. In fact, the incompetence of a supposedly deadly military corporation is almost funny and Heath fails to present them as anything other than a two dimensional force of evil.

What is praiseworthy, however, is Heath’s use of female characters, which dominate the narrative even though it could have been easy to feature male protagonists. If that wasn’t enough, the inclusion of LGBT characters, without fuss and spectacle, makes Replica stand out in an industry where such characters still don’t really become protagonists.

Whilst Replica has an engaging hook, Heath’s reliance on plot devices that work for middle grade fiction such as Money Run is his ultimate mistake. The ending just doesn’t work in the context of the book, which presents a more realistic vision of the future. Maybe it’s time for Heath to move away from mystery thrillers and explore pastures new – because he’s certainly a writer to look out for in the feature.