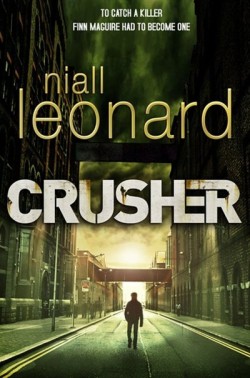 Published: 2012, September by Random House
Genre: crime, thriller Age: 14+
Synopsis: The day Finn Maguire discovers his father bludgeoned to death in a pool of blood, his dreary life is turned upside down. Prime suspect in the murder, Finn must race against time to clear his name and find out who hated his dad enough to kill him. Trawling the sordid, brutal London underworld for answers, Finn exposes dark family secrets and faces danger at every turn. But he's about to learn that it's the people you trust who can hit you the hardest...
Watch the book trailer

If someone bludgeoned your father to death with an acting award, wouldn’t you want to know who was behind the attack? Even if it meant becoming a killer yourself? For Finn Maguire, recently orphaned, that’s an easy question to answer.

Leonard’s greatest asset are his characters as well as his blunt, dry prose. Finn is a confused, jobless teenager, pursued by his father’s history. Motherless and now fatherless, Finn’s reaction and response to his new (and unwanted) independence is both realistic and believable as he bumbles through an amateur investigation trying to find out who could have had it in for his dad. Secondary characters are a little less convincing, with ex-social-worker Elsa Kendrick and his mother slightly more cliched and contrived characters given little time to develop their motives. Crusher’s romantic interest is a little more realistic and raw, and Leonard pulls no punches when it comes to depicting the sex drive of a seventeen year old.

The plot, however, is a different matter as Leonard relies on a multitude of implausible coincidences that demand a little more suspense of disbelief than should be really necessary in a crime thriller. As a whole, the thriller elements are some of the weakest parts of the novel and I was left wondering if Crusher would have worked better as an urban drama in the vein of Kevin Brooks‘ novels rather than an unbelievable crime thriller.

Crusher is too short and implausible a tale to rival YA crime thriller Long Reach, and anyone looking for something similar will be disappointed. However, as an urban drama or gritty coming-of-age novel, Leonard doesn’t disappoint with his believable portrayal of an orphaned teenager trying to come to terms with the loss of his father and mother.

More in the Crusher: