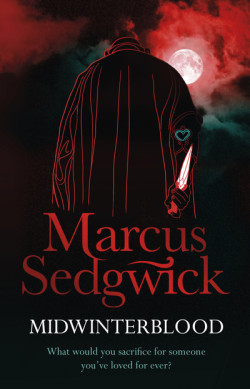 Published: 2011, October by Indigo Orion
Genre: fantasy, horror, mystery Age: 14+
Synopsis: What would you sacrifice for someone you've loved forever - told in seven parts and spanning ten centuries, a cleverly constructed, beautifully crafted love story with elements of thriller and the supernatural.
Watch the book trailer

Eric Seven arrives on the Blessed Island as a journalist trying to uncover its secrets in the year 2073. It all feels a little deja vu- the people, the culture, the odd, dragon-orchid flowers. And that it would be- because Eric’s story starts long, long before 2073: ten centuries previously, when Eirek bound himself to a Woman…

Midwinterblood is an odd little novel. Within its 240 odd pages lurk several stories of love, sacrifice, and curiousity, each a short story with relations to the others that slowly reveal themselves as the book progresses. Initially you may be wondering why there isn’t a single story thread, but the puzzle of the Island of Blessed soon unravels itself into an intriguing tale that is more in line with the oral traditions of old than a modern novel.

Whilst the characters of Tor, Eric, and Melle all reappear in the seven different tales Midwinterblood combines, they are still emotionally distant from the reader because of the differences in their various reincarnations. It’s hard to connect with a character when they only truly exist for several tens of pages. However, because of the way Marcus Sedgwick intended this and how Midwinterblood is written, this is of little importance. The focus of the novel is inherently on the story of Eric and Melle, though the apparant relationship between Melle and Eric is played down because of this and it’s very hard to “feel” the love they have for one another.

Midwinterblood initially starts up as a perhaps slightly cliched island-mystery story. Eric, a journalist, is sent to report on the odd happenings on the Isle of Blessed, where there are rumours of a mysterious orchid that has life-enhancing properties. Initially he’s welcomed by the locals, but their true intentions soon reveal themselves when they start sedating him with the tea of the orchid, which makes him forget everything he came for. Midwinterblood then drops into another story, some 60 years previous to the original 2070s setting to an archaeological dig where outsiders, again, discover Viking longboats and the bones of a father and his son. Every successive mini-story moves further back in time, and by the time we’re at the Viking roots of the novel, there is a noticeable atmospheric change from the dreamy, calm beginning to a violent, dark, and gritty tale between two brothers that is the unravelling of the mystery.

Sedgwick’s prose adapts well to the changing moods of the stories; it is lucid at first before returning to Sedgwick’s darker roots of story telling. Written in third person, the prose is simple and skeletal, again with echoing themes of oral traditions.

Midwinterblood is the intriguing tale of two people who are bonded through the ages with a love and a curse, and whilst the love between Melle and Eric isn’t always felt by the reader as strongly as it should be, the unravelling mystery is still an intriguing tale that slowly puzzles itself together through the different narratives. Midwinterblood is nothing like I expected; it’s more like seven separate but interlocked stories woven into one than anything else. Marcus Sedgwick fans will be pleased with the outcome, but for those who have never laid a hand on Sedgwick’s novels, Midwinterblood may by very different from expectations. Different, but good.