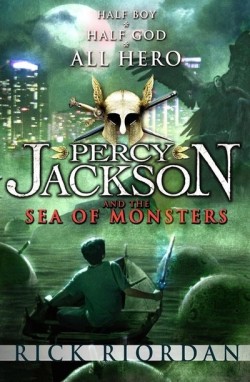 Published: 2006, May by Puffin Books
Genre: fantasy Age: 9+
Synopsis: You can't tell by looking at me that my dad is Poseidon, God of the Sea. It's not easy being a half-blood these days. You mortals can't even see the monsters we have to fight all the time. So when a game of dodgeball turned into a death match against an ugly gang of cannibal giants, I couldn't exactly ask my gym teacher for help. And that was just for starters. This is the one where Camp Half Blood is under attack, and unless I get my hands on the Golden Fleece, the whole camp will be invaded by monsters. Big ones. Can Percy survive the treacherous Sea of Monsters and restore order to Half-Blood Hill?

Last year, Percy Jackson managed to stop the Olympian gods declare war on each other. But the battle hasn’t finished yet; now Kronos, one of the overthrown Titans, is influencing a half-blood, and he wants to remove the Olympians from their seats of power. First stop for Kronos? Camp Half-Blood. Thalia’s tree has been poisoned, and with it the boundary line is fading. Soon, Camp Half Blood will be overrun, and the half-bloods will have nowhere safe to go. It’s up to Percy and Annabeth to save not only Camp Half Blood, but also Grover, who is in mortal danger….

After reading Percy Jackson and the Lightning Thief, I was wary that Percy Jackson and the Sea if Monsters may not live up to the thrilling narrative that was established in book one. I was wrong. No, this episode indeed continues  the fast paced action packed prose I loved so much in Lightning Thief. I felt it had even more action than Lightning Thief, hardly pausing to take a breath before bursting into another closely matched battle. Sea of Monsters is steeped in exciting action and sharp thinking, wrapped together in some fresh, down to earth prose.

Once again, the major failing points are the similarities with Harry Potter, and the sometimes predictable plot. Yep, you guessed right. Percy Jackson is now involved in a huge prophecy, where Percy is destined to choose what will happen to Olympia. Remind you of something? Yes, this sounds just like HP. However, and this is a big however, as much as you can see the similarities of plot lines between Percy Jackson and Harry Potter, Sea of Monsters is still a fantastic read, due to the creative use of Greek mythology woven into the story. This element alone seems to cast away the fears over plot similarities, and I still found Sea of Monsters a great read.

I also mentioned the sometimes predictable plot. Yes, just as in book one, Sea of Monsters suffers from predictable plot syndrome. If you are an older reader, you’ll be bound to find these  The most notable of these is when (this isn’t a major thing, so don’t worry. Just a minor event) Percy and Annabeth go into a spa which obviously has something fishy about it, and they know it too, but walk in anyway for some daft reason. I found that unbelievably predictable and stupid, as if it was written just to make the journey take longer.  However, and here comes another good counterargument, there are some great twists, notably at the end, and these where quite good surprises, as well as turning everything we know into mayhem…

At the very start, we are introduced to Percy’s school friend, Tyson. He seems to pop out of nowhere, and it’s  a bit odd and surprising. It could have been pulled off slightly better, had an improved explanation been provided.

Percy is still witty at times, although not as much as the last book, I think. We see a few more emotions coming through though, and this is good to see, and very interesting. Rick Riordan pulled some of them off quite well and realistically, especially Percy’s repulsion for Tyson later on.

There’s not a lot more that can be said about Percy Jackson and the Sea of Monsters that wasn’t said in my review of the previous book; this episode continues the strong, exciting prose, and the concept seems to get better and better every time! Although this book does have some downsides, it is still very entertaining to read, and I finished it within a day or two. All in all, it’s a great follow on, with a delightful ending that will have you groping for book three…