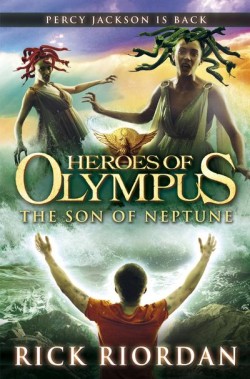 Published: 2011, October by Puffin Books
Genre: fantasy Age: 9+
Synopsis: The SECOND title in this number one, bestselling spin-off series from Percy Jackson creator, Rick Riordan. This crazy messed up world of gods and monsters is Percy Jackson's reality, which pretty much sucks for him. Percy Jackson, son of Poseidon, God of the Sea, has woken from a very deep sleep and come face to face with two snake-haired ladies who refuse to die. But they're the least of his problems. Because Percy finds himself at a camp for half-bloods, which doesn't ring any bells for him. There's just one name he remembers from his past. Annabeth. Only one thing is certain - Percy's questing days aren't over. He and fellow demigods Frank and Hazel must face the most important quest of all: the Prophecy of Seven.If they fail, it's not just their camp at risk. Percy's old life, the gods, and the entire world might be destroyed . . .

How many demigods does it take to ruin Gaia’s plans of world domination? Well three, for now at least. Percy has been gone for eight months now. He’s lost all recollections of his past and is being chased by two gorgons across America. That is, until he bumps into godess Juno and finds the Roman camp, Camp Jupiter. In next to no time he’s sent on a quest with demigods Frank and Hazel to Alaska, to try and stop Gaia’s servant giant Alcyoneus, who’s out to destroy the gods. Only the demigods can save Olympus. And if they don’t? All human kind will be wiped from the face of the earth…

After the critical success of The Lost Hero, the flagship novel of the sequel series to Percy Jackson, Rick Riordan had quite a challenge to follow up such an excellent book with The Son of Neptune. In this case, the return of Percy, whom we have come to know and love in the Percy Jackson series, is more than enough for most fans to be clamouring for The Son of Neptune. The Lost Hero lacked some of that “percy-jackson-ness”, perhaps a dulling in humour or a couple of weaker characters, but The Son of Neptune goes above and beyond, superseding perhaps even the original series.

The Son of Neptune introduces the reader to the Roman side of things (The Lost Hero, whilst introducing the whole Roman/Greek idea, only ever followed up the Greek half), and Riordan is careful not to simply replicate Camp Half-Blood within its Roman equivalent. The vicious efficiency of the Romans is a stark contrast to Percy’s natural surroundings of the more lax and less-orderely Camp Half-Blood.

Percy, of course, has little or no recollections when he arrives at Camp Jupiter, the Roman demigod camp, but he is still very much Percy with the same sarcasm and loyalty that he had in Percy Jackson. It is undeniable that he makes a more likeable and relateable character than Jason or Leo or Piper in The Lost Hero, but then, he isn’t exactly a new character.

As far as secondary characters go, The Son of Neptune has a very strong supporting cast. Frank, who lost his mother just before joining Camp Jupiter, has many secrets of his past to hide, and Hazel also veils herself in secrecy, telling no one of her direct involvement with the rise of Gaia and Alcyoneus, Gaia’s greatest creation. Both have fantastically crafted back stories and Riordan writes some great character moments that really give insight into their personalities and emotions.

Riordan’s prose is, as usual, excellent. His humour is a contrast to the grave situations the heroes face and he manages to lighten the mood without trivialising their Quests. The action is succinct and well written, and the romance is teasing and really quite touching.

I’m sure Riordan felt very accomplished once he finished writing The Son of Neptune, for within its 500 pages he manages to outdo himself once again. Without wanting to say too much, I have a feeling that The Son of Neptune could well be his best novel yet- awesome in every sense of the word. It’s good to be back in the world of Greek and Roman gods, fighting mythical beasts and saving the world. All I can do now is wait for the next novel in the series!

What did you think about The Son of Neptune?

More in the Heroes of Olympus: