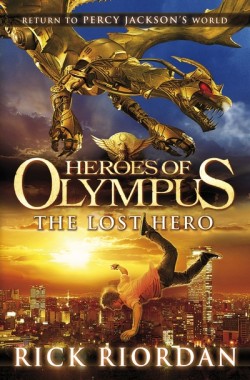 Published: 2010, October by Puffin Books
Genre: fantasy Age: 9+
Synopsis: After saving Olympus from the evil Titan lord, Kronos, Percy and friends have rebuilt their beloved Camp Half-Blood, where the next generation of demigods must now prepare for a chilling prophecy of their own: Seven half-bloods shall answer the call, To storm or fire the world must fall. An oath to keep with a final breath, And foes bear arms to the Doors of Death. Now, in a brand-new series from blockbuster best-selling author Rick Riordan, fans return to the world of Camp Half-Blood. Here, a new group of heroes will inherit a quest. But to survive the journey, they’ll need the help of some familiar demigods.
Watch the book trailer

Percy Jackson has disappeared. All of Camp-Half Blood are looking for him, their Lost Hero. Annabeth is searching far and wide, and when Rachel, the Oracle, tells her she will find what she seeks in the Grand Canyon, she expects to find Percy. Instead, she finds three demigods- Jason, Piper and Leo. But these aren’t just any old demigods… quite quickly, a mystery unravels that threatens the very existence of the Olympian gods…

The story follows the events that occur after Jason finds himself on a field trip of the ‘Wilderness School’ to the Grand Canyon. What’s more, Jason doesn’t know who he is and why he is there, although his “friends” claim to have known his for several months, even though Jason has no recollection of this…Quite quickly, things unravel in unexpected ways, and the trio find themselves on a dangerous quest…

There was always a danger that The Heroes of Olympus, the sequel series to Percy Jackson written by Rick Riordan, would be a carbon copy of Percy Jackson. Luckily, that’s not the case, and The Lost Hero manages to continue the things that were interesting about Percy Jackson and add to them in an original way which was quite unexpected.

It was surprising to hear that The Lost Hero featured 3 protagonists, two males and one female, uncannily similar to Percy Jackson. But all three- Jason, Leo and Piper- are satisfyingly different to Percy, Annabeth and Grover that it doesn’t really prove to be a problem. In fact, the way Riordan has set them up is interesting, and works really very well with the original series. By the end of the book, Jason has already established himself as the likeable main character of the series, Piper has a reputation as a caring, just and honest fighter, and Leo has a name for his intelligence and wittiness. Within the first few pages, they are easily likable and modern characters.

Percy Jackson was always written in first person, which gave it a unique perspective. Percy’s sarcasm was an attraction for many readers, and while Leo and some of the antagonists do provide comic relief, The Lost Hero is a noticeably less humurous book. For people who lived off the jokes in Percy Jackson, this may be of disappointment, but the third person narrative makes it clear that Rick Riordan does not want to repeat Percy Jackson, and that he wants to write something fresh, interesting and funny for pre-teen and teen readers.

Like most of Riordan’s recent novels, The Lost Hero is of a considerable size (550 pages long). This extra length seems to imply that Riordan wants to target an older audience- and The Lost Hero does have an older feel to it than the first Percy Jackson. A romantic theme plays just off centre stage, and is much more prominent than in the Percy Jackson. Whether this is for good or for bad is still to be seen, although I do think that aiming The Heroes of Olympus for a slightly older audience is a good idea, particularly as the original fans of Percy Jackson start to enter their mid and possibly late teens.

The book may be long, but at no point does it lack in story. The intriguing and incredibly mystical plot manages to push forward the story throughout the book. The only place which is slightly wordy is the last chapter or so, which is almost like an epilogue. It’s at this point that a lot of answers are given to questions raised right from the start. Personally, I would have preferred these questions to remain unanswered; it would have made the subsequent novels a lot more interesting, and it’s always good to leave the reader guessing.

What did you think about The Lost Hero?

More in the Heroes of Olympus: