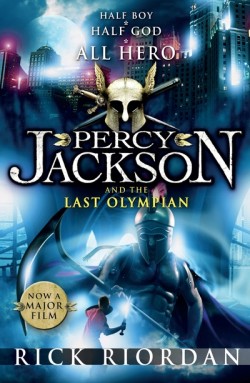 Published: 2009, May by Puffin Books
Genre: fantasy Age: 9+
Synopsis: Most people get presents on their sixteenth birthday. I get a prophecy that could save or destroy the world. That's how it is when you're the son of Poseidon, God of the Sea. According to an ancient prophecy, bad things will happen when I turn sixteen - because I'm the one who gets to decide the fate of the entire world. But no pressure. This is the one where Kronos, Lord of the Titans, is beginning his attack on New York City, where Mount Olympus stands virtually unguarded. Oh, and the dreaded (and not to mention enormous) monster Typhon is also heading our way. So it's me and forty of my demigod friends versus untold evil . . .

The time has come now for Percy to face his biggest decision yet: a decision that will control whether or not Olympus falls.  The gods are at the mercy of a 15 year old. The right choice isn’t always the easy choice, and many hardships stand in his way…

With The Last Olympian, the Percy Jackson series has come to an end, and certainly not quietly. The Last Olympian is a fantastic climax to the series that is witty, action packed and highly entertaining. Rick Riordan has triumphed and has managed to write perhaps the best book in the series, which is challenging, considering the merits of The Lightning Thief and some of the latter books.

Unlike some of the earlier books, The Last Olympian suffers a lit less from the predictable plot syndrome, making it a far more unexpected read. Apart from a case or two where I could guess what happened a few pages before it did happen, there wasn’t really much foresight.

There were a few things that unsettled me, however. Most notable is Percy himself. At the beginning of the book, he is supposed to be 15 years old (he turns sixteen at the end). What I found, though, is that he seemed to act much more like a thirteen year old. Percy as a character hasn’t seemed to mature much since the Lightning Thief, which is a real shame, because a 16 year old Percy could potentially have been very amusing. The most obvious factor of this is the romance between Percy and you-know-who.  Their relationship has been very much PG-ed (I’m assuming because Percy Jackson attracts younger readers). That’s all well and good when you’re nine, but at 14 you come to expect a romance that is far more mature, especially when the character is 15/16. Luckily, towards the end, these issues did free up a little.

Similarly, I was a little disappointed that Percy and you-know-who only got together in the last chapter or so. It’s a lovely relationship, and I wished it had started earlier in the book, if not in The Battle of the Labyrinth. I mean, they only have a couple of kisses, and even they are only mentioned, really.

Apart from that little complaint, the characters were superb. Percy was his witty self, although he was a little more responsible than previously, I thought. Annabeth is struggling with some internal conflicts, which are great and really fleshen out her character, and Grover, Tyson and all the others are still a great read, although Kronos was a bit of a formulaic villain.

In terms if action and pace, The Last Olympian certainly does not disappoint. Much of the book is crammed full with action and adventure, introducing as to many new characters from Greek mythology. At no point whatsoever was a bored whilst reading The Last Olympian.

Percy Jackson: The Last Olympian is a very worthy end to this great series. As all the story arcs come to a climactic and breathless conclusion, you are sure to be wanting more… The Last Olympian will provide a thrilling read that stands apart from modern fantasy due to its Greek story lines.