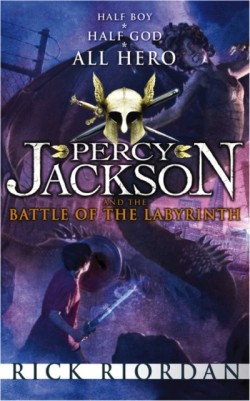 Published: 2008, May by Puffin Books
Genre: fantasy Age: 9+
Synopsis: Honestly, blowing up another school was the last thing I wanted to do. As the son of a Greek god, I've had my share of near-death disaster. This summer, I didn't choose to battle the cheerleading squad, but when two hissing she-devils with fangs are heading straight for you, what's a half-blood meant to do? That was just the beginning. This is the one where my arch-enemy, Luke, is looking for a way to invade our camp via an ancient labyrinth. If he succeeds, thousands of bloodthirsty monsters will attack. So it's goodbye sunshine, hello darkness as four of us descend into the terrifying underground and beyond . . .

The Titan army is amassing big time, and Kronos is slowly returning from the depths of Tartarus. Now Luke must find a way to invade Camp Half Blood from the inside, and the answer is an ancient labyrinth that is confusing and very dangerous. Annabeth, Percy, Tyson and Grover must prevent Luke from navigating through the Labyrinth; otherwise all hell will break loose…

Percy Jackson: Battle of the Labyrinth is in many ways a lot different to the previous books. Certainly when I read it, there was a lot less humour and sarcasm. That isn’t to say that it Percy Jackson: Battle of the Labyrinth hasn’t got it’s laughs; there are plenty of witty comments and jokes still throughout the books. The book seems to take itself more seriously now: PJ: BotL is riddled with battles, fights and punch-ups. Most of all, though, Battle of the Labyrinth is a lot less predictable. Characters are not who they seem to be, things you thought you knew are wrong and generally, the whole book is clouded with mistrust and revelations, which make it a fantastic read.

Taking itself more seriously in a good or bad way? You might ask. The answer is, in both. While the action really is fantastic, and the book doesn’t really calm down at all, some scenes do seem a tad rushed. The last battle, particularly, seems like an easy win, and I was s bit cynical that it could be over so quickly, taking into account that this was the climax of the book, and perhaps even the previous books. In general, though, Percy Jackson: Battle of the Labyrinth is bursting with epicness, and I could barely stop reading! The last half of the book I read in one sitting, trying to digest everything that was happen. In hindsight, I really should have spent more time indulging myself, but the tension was just too great!

Character wise, Percy and Annabeth have matured since the last book. Perhaps a little too fast for my liking: the difference between Titan’s Curse and  Battle of the Labyrinth is quite noticeable. Ah well, I shouldn’t complain, as Percy is finally starting to take an interest in Annabeth (and perhaps a few other girls :P)! I know, I’m a boy and I really shouldn’t be looking forward to all the sloppy romantics, but I absolutely love it, and I’m getting rather impatient that Percy and Annabeth haven’t kissed yet (at least not properly…). Some of the new characters make for some great plot twists and turns, and it’s great to have Tyson back. As much as I didn’t like him in the Sea of Monsters, Tyson makes a great contribution to the story, and he fits in very well.

The story, as mentioned above, is full of secrets that slowly get revealed as the book goes along. The Battle of the Labyrinth has the most revelations and plot turns of the whole series, and it really is impossible to guess what happens next, which was a problem with the Lightning Thief. The pacing is fantastic, although it can sometimes leave you a little lost and confused.

Although Percy Jackson: Battle of the Labyrinth is perhaps not the best of the series, it is certainly one of my favourites, and it really is a great contribution to the series as a whole. PJ: BotL will keep you hooked until the very end, and I mean the very end: right to the last page! I recommend you read the series in order, but when you do cone to read Battle of the Labyrinth, be ready for sudden twists and turns!

What did you think about Percy Jackson and the Battle of the Labyrinth?