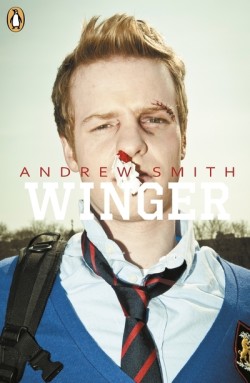 Published: 2014, June by Penguin
Genre: bildungsroman Age: 14+
Synopsis: Ryan Dean West is a fourteen-year-old boy at a boarding school for rich kids. He's living in Opportunity Hall, the dorm for troublemakers, and rooming with the biggest bully on the rugby team. And he's madly in love with his best friend Annie, who thinks of him as a little boy.With the help of his sense of humour, rugby buddies, and his penchant for doodling comics, Ryan Dean manages to survive life's complications and even find some happiness along the way. But when the unthinkable happens, he has to figure out how to hold on to what's important, even when it feels like everything has fallen apart.Filled with hand-drawn illustrations and told in a pitch-perfect voice, this realistic depiction of a teen's experience strikes an exceptional balance of hilarious and heartbreaking.

So I guess Winger is the second fantastic Andrew Smith novel to be published in the UK. It’s Ryan Dean’s story: the story of his first (and only) term at the euphemistically-named ‘Opportunity Hall’ at Pine Mountain, a boarding school in the States for rich American teenagers. At fourteen years old, he’s the youngest kid in eleventh grade – and by a two year margin. This is the story of his coming of age from a scrawny-ass rugby kid, which earns him his nickname ‘Winger’, to a guy whose weight is half made up with balls (Chas’ words, not mine.)

That’s a line that is repeated throughout the novel – 29 times no less – and becomes a motif for Winger. There’s something very organic and authentic about repeating an idea, word or phrase, and it illustrates perfectly the constant worries that teenagers have, the constant self-doubt. There’s no doubt that Smith is one of the best writers of thirteen, fourteen, fifteen year old characters. It’s very natural. Back to Winger’s character arc, which makes this a coming-of-age novel in every sense of the word. I’ve rarely seen a character grow and mature so much.

Smith’s ability to create a compelling protagonist spills over into his secondary characters. There’s no sense that Smith skimps on the detail here as there’s realness about them all and the impression that each of them is at the centre of their own story. They’re not all sympathetic (someone’s got to be the bad guy!) but Winger is their story as much as Ryan Dean’s; from conflicted Annie to only-out-boy-in-Pinewood Joey, Winger’s friends are just as interesting as him (if not more so!)

With a bildungsroman it’s hard not to be conventional: there’s only so much original teen angst and boarding school woes you can write about. And in many ways Winger is utterly conventional: on a Dead Poets’ Society scale. But I honestly couldn’t give a shit. Because Joey. And Winger. Annie. Seanie and JP. And also, maybe, if I’m feeling particularly generous, Chas. And that’s what makes Winger such a great book. You’ll love it.

What did you think about Winger?

More in the Winger: