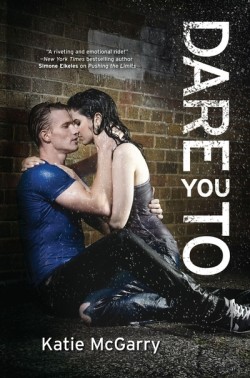 Published: 2013, May by MiraInk
Genre: bildungsroman, romance Age: 14+
Synopsis: Beth's the bad girl that no-one wanted, not even parents. Ryan's the high school hero that everyone wants a piece of even if no-one knows the real him. Their paths should never have crossed now they're each others only life line. If anyone knew the truth about Beth Risk's mum they'd send her mother to jail. So seventeen year old Beth protects her mum at all costs. Until the day she cant. Suddenly sent to live with her uncle in a small town Beth is now stuck with an aunt who doesn't want her, and at a school that doesn't get her. At all. Except for the one guy who shouldn't go anywhere near a girl like Beth. . . . Ryan Stone is gorgeous, a popular jock and the town golden boy with secrets he cant tell anyone. Even his friends. As Ryan and Beth dare to let each other in, they re treading on dangerous ground and the consequences could change their worlds forever.

It isn’t everyday that a girl with attitude walks into a bar. And it isn’t every day that Ryan is dared by his friends to try and get her number. But this seemingly coincidental collision of events is about to change Ryan and Echo’s lives forever, as her Uncle rips her from her former life amongst the dregs of society and introduces her to what seems to be the perfect American family – Ryan’s family. Typical story of bad boy falls in love with good girl? Think again – and reverse the roles!

Though it is not a “proper” sequel in that it doesn’t follow right on from Kate McGarry’s debut, Pushing the Limits, Dare You To does see as returning, fleetingly, to familiar characters before we are quickly hurried on to explore the lives of Beth and Ryan, whose lives are about to collide.

In fact, much like Pushing the Limits, Dare You To tells the story of an unlikely romance that (eventually) comes to fruition and rescues both participants from some of the hells they lived previously. It’s an obvious happy-ever-after, even from the start, but a perfect tool for driving the novel forwards and pushing our expectation and anticipation for that first kiss.

Dare You To is written in first person, flipping between the perspective of Beth, who looks after her drug-addict mother and tries to rescue her from her violent boyfriend; and Ryan, who’s only ever out to win and plays for the school baseball team. It soon becomes clear, though, that Beth isn’t the only one with problems; and even though Ryan seems to have a supportive family, they’re far from it. Sadly, McGarry doesn’t explore Ryan’s “winning streak” attitude a little more, which dominates much of the novel; he even miraculously wins a writing competition, something he’s had little practice in and seems like a neat way for McGarry to make him a little more attractive to her readers. It’s a shame, because Ryan just seems a little too lucky at times, and his emotional journey suffers because he never confronts the inevitable eventuality of losing – something that could make him a stronger person.

Dare You To may not be for everyone, but McGarry is an addictive writer and the pages fly by. Particularly impressive is McGarry’s portrayal of teenage life, complete with heightened emotional intensity (though, in fairness, both Beth and Ryan deal with some pretty big baggage, too). Dare You To is well worth the read even if, like me, you don’t normally stray into chick-lit and/or romance: this is far from soppy.