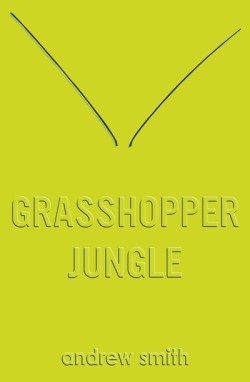 Published: 2014, February by Electric Monkey
Genre: adventure, apocalyptic, bildungsroman, contemporary, LGBT, sci-fi, weird Age: 15+
Synopsis: If you're a fan of John Green, Michael Grant, Stephen King or David Levithan, get your pincers stuck into this. In the small town of Ealing, Iowa, Austin and his best friend Robby have accidentally unleashed an unstoppable army. An army of horny, hungry, six-foot-tall praying mantises that only want to do two things. This is the truth. This is history. It’s the end of the world. And nobody knows anything about it. Funny, intense, complex and brave, Grasshopper Jungle is a groundbreaking, genre-bending, coming-of-age stunner.
Watch the book trailer

“Good books are about everything,” says Austin, and Grasshopper Jungle, like all good books, is also about everything. It is the tale of inheritance, of history; of identity and truth, of love, attraction, youth and freedom. It is, oddly enough, also the tale of the end of the world; a tale of death-by-giant-insects in Ealing, Iowa, which may seem surreal; but then, the whole novel verges on surreality, in the vein of those really weird artshouse films (I’ve seen a few, to say the least!) and those entirely fascinating immersive theatre experiences. It may seem like a giant contradiction, too, that a seemingly genre-novel could encompass such grand and important themes (and if you think that you definitely haven’t read enough genre fiction!) but I can tell you now: it is a delicious combination.

Genre-conventions often get a bashing by people who believe them to be too restrictive, too narrow-minded and too, well, label-oriented, but genres conventions are good for one thing: being broken. And Andrew Smith does enjoy breaking them; in reference to other works, Grasshopper Jungle is like the illegitimate love-child between Cloud Atlas (whose notions of repetition, history and destiny are similarly, yet differently, explored) the Straker Tapes (which also begin with the notion of domestic suburbia being interrupted by an unusual and science-fiction end-of-the-world comeuppance) and the Australian cult classic On the Jellicoe Road (whose sense of desolation, dilapidation and youthful freedom equally permeate Grasshopper Jungle). Like all the best writers, Smith manages to pick the best from a variety of genres to evoke a strong and visceral portrayal of teenage life recently invaded by freaky six-foot high insectoids – without letting the sci-fi elements overpower the more humane plight of a horny sixteen-year old. You know what I mean.

Grasshopper Jungle is told from the first person narrative of Austin Szerba, but Andrew Smith cleverly allows Austin to present portions of the novel in an omniscient style as the recorder of history; of new history, and the history of the end of the world. This is how history works; It is omniscient. The book is recognisable for its explosive and idiosyncratic style; succinctly and beautifully described by Austin’s girlfriend: “I love how, whenever you tell me a story, you go backwards and forwards and tell me everything else that could possibly be happening in every direction, like an explosion. Like a flower blooming.” And Grasshopper Jungle is just like that – though less at first – a thousand windows into the world, each with a connecting string, being followed by our narrator and penned to paper. It takes a while to get used to; the hectic style seems random and jarring to begin with: but you read yourself into it, you enjoy the myriad connections made and enjoy how the story comes together seemingly from scraps until a whole is painted that feels both relevant and profound.

I don’t believe in post-diagnosing fictional characters with labels or medical types for the same reason I don’t like doing it with historical figures; whether St Paul was gay or not is of complete irrelevance to our lives and our understanding of his work. Saying that, however, as the novel progresses, there is a definite sense that Austin has ADHD tendencies; particular in “his” writing, which is wonderfully jittery and jumpy and becomes increasingly so as the novel progresses. He’s also slightly OCD, repeating ideas again and again to craft his wonderful history, and beyond explicit, which makes Grasshopper Jungle surprisingly refreshing. Smith chooses to be ballsy and it really does pay off – even if this book is bound to get banned by someone, somewhere for its portrayal of teenage life being “too real”. And shit like that.

Austin, in many ways, is a typical teenager; uncertain of what he wants and who he is, and constantly horny – even for the most bizarre things. Particularly, though, is his love for both his girlfriend Shann and his best friend Robby – love that is somehow equal, confusingly so. Austin’s sexual confusion is not only the first I have read in YA literature (I find that generally, LGBT YA books concern themselves about characters who are already, to an extent, aware of their identity) but also true to life. Smith captures perfectly the dysphoria and terror of realising you fancy someone that society tells you you shouldn’t. We made this stupid rule and this stupid rule. Boys are not allowed to love each other. Then we painted bison on the wall. Austin isn’t always a likeable character, though; and he’s real because he isn’t. At times, too, you question his reliability as a narrator – “This is the truth,” he writes, and I couldn’t help doubting if it really was.

More than anything, Grasshopper Jungle is a book that deserves to become a cult classic. Andrew Smith has written a piece of literature, for that is what it is, that will flirt with controversy and engage its readers with an explosive and unstoppable narrative that will reward all those who go back in years to come to rediscover the secrets of Iowa, Ealing. To anyone who still has doubts about reading Grasshopper Jungle; just read it, and give it a go. I promise you’ll like it. And if you don’t, well, you can call me a liar. I never lie.

What did you think about Grasshopper Jungle?