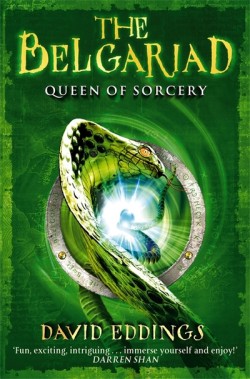 Published: 1983 by Random House
Genre: high fantasy Age: 11+
Synopsis: Legends tell how Belgarath the sorcerer and his daughter Polgara defeated the evil God Torak, imprisoning him in an endless sleep. But now a priest of Torak is racing to his God with the Orb of Aldur and is racing to reawaken him. Belgarath and Polgara are on his trail. With them is Garion, a simple farm boy only months before. And with each league the group travel, the power of sorcery is growing in Garion...

Garion and his companions find themselves traveling to new and interesting places on their quest to recover the Orb, including the forever torn Arendia, the politically obsessed Tolnedra, and Nyssia, home of the snake people. Garion encounters many strange new allies – and many strange new enemies. What shall he discover about himself and his role in the game of fate along the way?

Queen of Sorcery is book two in the Belgariad, a series written by David Eddings. The story itself starts just where it left off with Pawn of Prophecy– during the journey to recover the Orb of Aldur, a powerful relic that has fallen into evil hands. It continues the same theme from book one; manhood or coming of age. With each novel, Garion grows, both physically and mentally, and learns more about himself and who he will become. In Queen of Sorcery he also struggles with a dangerous promise made to a friend, and, most importantly, with the revelation of his true power.

As usual, Eddings’ characters are relatively brilliant. In QoS, we still have the majority of our cast from Pawn of Prophecy as well as a few new additions – Hettar, an Algar horseman with an affinity for slaughtering Murgos, the Mimbrate Knight, Mandorallen, who fears nothing, the patriotic Austurian archer, Lelldorin, and the spoiled Tolnedran Princess, Ce’Nedra. They all bring their own personalities to the story, and make it more interesting while doing so! Ce’Nedra spends much of her time driving Garion up the wall, while Mandorallen and Lelldorin provide their own Arendish flair to things. Again, my favorite thing (or would it be things?) about Eddings’ stories are his characters. They’re usually so real and different from one another that I end up feeling as if I know them personally, even if they are just ink and paper in the end.

Just about all of Queen of Sorcery is spent on the go – the characters travel through three countries in the book. Arendia is much like a medieval England, complete with knights in shining armor, Lords and Ladies, and even the system known as Serfdom. Then there is Tolnedra – probably one of my favorite nations in the books. When people aren’t swindling one another out of business or attempting to keep everything as prim and proper as possible, they’re cutting each other down in the middle of the street. I found Tolnedran politics incredibly amusing myself. And then we reach Nyssia, ruled by the eternal Salmissra and full of corruption! Oh, and snakes. Nyssia is always full of snakes, too. As always, the book is rather face paced – at least for me it was. I finished it rather quickly and picked up book 3 as soon as I was done!

One of my favorite things about this series that this book seems to bring to light are the territories and nations in Eddings world. All of the countries are drastically different from one another, no matter whether they share a God or not, and exploring their little societies and way of life in the background is always one of the more interesting (and amusing) aspects of the series for me. With the amount of distance traveled in Queen of Sorcery, its a pretty good example of just that. I still love Tolnedra, by the by – I can’t remember how many times I’ve snickered while reading through that particular part of our characters’ journey.

Queen of Sorcery is the second in a line of amazing books, in is what is probably one of, if not, my favorite fantasy series in existence. I adore Eddings’ style and flair to death, especially his sense of humor, and the worn out, barely-there condition of my Belgariad set should tell you just how often I find myself flipping through their pages again.