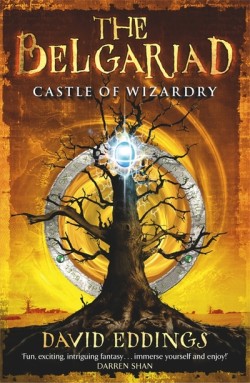 Published: 1984 by Random House
Genre: high fantasy Age: 11+
Synopsis: Garion and his companions now have the Orb of Aldur, carried by an innocent young boy, and must return it to its rightful home on the pommel of the sword in the Great Hall on the island of Riva. As they journey across the lands, Murgo soldiers and Grolim sorcerers try to stop them. But Garion's true adversary, the evil God Torak - is waking up in his dark tomb - ready for the final conflict.

In Castle of Wizardry, book number four of the Belgariad, we once again rejoin the group where we left off. With the powerful Orb of Aldur finally recovered from the East, the quest Eddings’ characters first set out upon in Pawn of Prophecy is nearing it’s conclusion. But they still must reach the island kingdom of Riva before Erastide. And our now-conflicted, and newly named, Belgarion has yet to find out his part in the prophecy’s scheming. What do the rivaling forces controlling his universe have in store for him? Or for the little spoiled Tolnedran princess, Ce’Nedra?

The main themes of this book are, again, those of manhood and coming of age. In this book, Belgarion takes a huge step in this, basically ending the path he has taken to become what he was meant to be – though not entirely what he was meant to do. This book is probably one of the most important in both The Belgariad and Mallorean for this, as Garion is finally ready for what he was destined to do and sets off to do so.

First off, I must say that while Garion’s revelation is great and all, I simply ADORE the transformation that occurs in Ce’Nedra – we finally see her become something more than some spoiled princess and see that she has a larger role than simply being the love interest or creating an amusing tension with the protagonist. She seems to stumble upon what is more important and takes action to protect just that. Although no new major characters are introduced in this book, we do get to learn more about the characters we know and love, and some of them, like Garion and Ce’Nedra, grow as characters as the book progresses.

As for the world of David Eddings, the only real new ground we cover is that of visiting the island nation of Riva for the first (but certainly not last) time. Riva is probably one of my favorite places in the series, though that is more due to the involvement that the characters have with the Isle and the history I have learned about it’s past after reading every book attached to the Belgariad than it has to due with the island itself. We also return to Arendia and Tolnedra, a trip that involves my favorite part of the book! That is, Ce’Nedra’s new . . . mission for herself.

I have next to no issues with this book. The pacing is perfect, and it’s very easy for the reader to become involved while reading, something that is pretty usual for me when it comes to Eddings stuff. As said before, I adore the plot of the book itself in particular and enjoyed it immensely.

Castle of Wizardry is one of my favorite books in this series, or just of David Eddings’ books, period. I love the revelations, the conflicts and the transformations. Just brilliant. We fans love you David and Leigh! You and your brilliant books that is, Castle of Wizadry being one of the best!

What did you think about Castle of Wizardry?