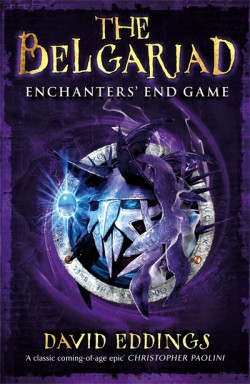 Published: 1984 by Random House
Genre: high fantasy Age: 11+
Synopsis: 'Come, Belgarion, Child of Light. I await thee in the City of Night ...' A confrontation that has been prophesied for thousands of years is racing towards a conclusion. For as Garion comes into his heritage as the Rivan King, Overlord of the West, and takes up the Orb of Aldur to protect the land, Torak awakes and his evil hordes of Murgo soldiers and Grolim priests march in his name. While the princess Ce'Nedra mobilises the forces of the free lands to repel the invaders, Garion heads for his duel with Torak - a duel upon which the fate of the whole world depends...

The final book in The Belgariad fantasy series, Enchanter’s End Game begins by following Belgarion, Belgarath and Prince Kheldar’s trek through Gar og Nadrak as the small trio makes its way to the darkened city of Cthol Mishrak so that Garion may face the twisted God Kal Torak and fulfill the prophecy which has awaited him for centuries. It also covers Ce’Nedra and the tiny princess’ efforts to distract the Angarak kingdoms from the Child of the Light and his companions by raising an army to wage war against the Angarak people. She captures not only the victories that come with such a venture, but the losses and problems that accompany it for the small princess and her followers.

This book doesn’t really deal too much with the coming of age theme as it’s predecessors did. It basically only centers around the good vs. evil theme as the protagonist nears his final confrontation with his ultimate enemy – a confrontation that puts an end to The Belgariad as a series. I suppose Belgarion does mature a bit more, especially in the final chapters, but this theme is no longer the main one as Garion has reached what is, if not very close to, his full potential as the hero by the begining of the book.

First off (something I must say), I love the prologue of End Game. It is my favorite of Eddings’ prologues, and the most memorable part of his books for me. I love seeing the inside of Torak’s imperiously selfish mind and getting the chance to kind of see things from his point of view – those first and last paragraphs gave me chills! Brilliant.

Now that that’s done, the most important character that we meet in Enchanter’s End Game would definitely be Kal Torak. I love his character (go figure), and he is indeed one of my favorite villains I have read thus far. His manner of twisting things to make him seem the victim or hero is delightful and I enjoyed his part in the series. We finally also meet up with Zedar, formally Belzedar, and confronting him was awesome as well, though slightly tragic – I definitely pitied him as a character, despite all that we’d heard of him being a traitor and rather despicable person. I also was both chilled and amused by Emperor Zakath’s personality and mannerisms. As usual, Eddings really exceeds himself as a writer when it comes to his characters, whether they be lovable or loathe-able.

The lands visited are mainly those we have seen already – we only really see more of the Angarak kingdoms, though we do get to encounter the Thullish people for really the first time, pathetic and terrified a group of people as they are. We also see the City of Night and home of Torak, which was very interesting, as would be expected of the ruined city of a God.

One thing I love about these books has to be the battle scenes, the main one being in this book. They are very well described, but in an interesting and involving way. It almost seems at times as you are there fighting along with the armies, and Eddings portrays all sides of the battle – whether it be the blood, the death, or the glory, he gives each an exciting or emotional feel. Honestly, I always will adore his battle scenes! They have pushed me to the edge of my seat (both literally and metaphorically), as well as saddening me or making me snicker.

No issues with this book, period. It is my favorite in the series. No competition, and this counts for all of the books associated with the Belgariad, not just within the series itself. By the end of Enchanter’s End Game, many, if not all, of the loose ends the other books left behind are tied, finishing off as a wonderful ending to a wonderful series and, in my opinion, completing the five book saga perfectly – though, of course, not the exploits of the characters. We still have the Malloreon to think about! Love you David and Leigh!