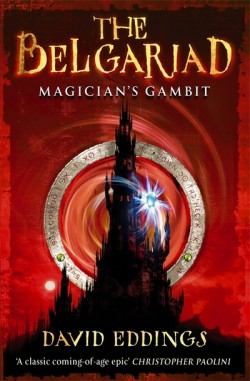 Published: 1983 by Random House
Genre: high fantasy Age: 11+
Synopsis: Many thousands of years ago, two prophecies came into being and a moment was fixed, when only one would determine the future. This moment, a clash between the maimed god Torak and the descendant of the Rivan king, is approaching...Garion, was brought up as a farm lad but is now beginning to understand the extent of his part in the prophecy, and working hard to control his sorcerous power. He is travelling towards this meeting in a sinister tower where the evil god lies sleeping. With him is the wise sorcerer Belgarath. And Ce'Nedra - a wilful young princess who refuses to believe in sorcery, but is terrified that Garion will die in the coming confrontation...

This third installment of The Belgariad follows it’s characters as they travel through a variety of new and interesting places; Maragor, a land empty of life, littered with gold and the ruins of a long-lost civilization and haunted by the tortured soul of the God Mara; the Vale of Aldur, home to the God as well as his ancient disciples, including Polgara and Belgarath; the Ulgo caverns, caves holding cities hidden from the world where the God UL rules. Follow along as the group meets new friends and old enemies on their quest to recover the Orb and watch as Garion grows ever closer to who he is supposed to be and what he was born to do.

The main themes of this book are, again, those of manhood and coming of age. In Magician’s Gambit, Garion finally begins to realize who he is as the journey for the Orb nears it’s end. Another smaller and more underlining theme would probably be that of the devastation wrought upon the world by greed, from seeing the results and anguish Tolnedra caused by their destruction of the people of Maragor. Although coming of age is still the main idea behind this book, as it is with almost of the books in The Belgariad.

As always, Eddings characters are brilliant! We have, of course, the team we left off with, and come across three new members of the prophecy in this book to boot – the Blind Man, the Mother of the Race that Died and Bearer of the Orb. We also finally get to meet the twisted and chilling Ctuchik, high priest and disciple of Kal Torak. The Group crosses paths with two Gods as well – tortured and maddened Mara, a meeting that I loved reading and probably one of my favorite parts of the series, and the father of the Gods, UL. One of my favorite additions, and fairly important when considering the Malloreon series, was that of the remarkable little colt or just simply “Horse.”

We are introduced to three new nations in Gambit – Maragor, the caverns of Ulgoland, and Cthol Murgos. Maragor, desolate as it may be, was an interesting addition for me, not only for what occurs there for the characters but for it’s history – tragic though it may be. I also enjoyed Ulgoland, and love how original it is as well as it’s own past and how it came to be – another example of Eddings’ creativity when it came to his world and the societies and cultures he created within it. Finally entering an Angarak nation was pretty big to me as a reader as well, as it marked the first time the group really strays into hostile and/or unfamiliar territory. And what happens there is hugely significant as well, of course, though I won’t give anything away!

However, one issue I had with Gambit in particular was the end of the meeting with Ctuchik. Honestly, I almost felt cheated by it, and it felt rushed and somewhat off to me. The book is still a great one, but, for me, this moment was not Eddings at his best. It could have been pulled off better or perhaps just not as quickly, and I would probably have been more satisfied. Not a huge problem but an issue all the less! I would also say that the pace in Gambit was a little slower than usual. Probably not as noticeable until you’ve read the series as many times as I have, though!

Though probably not my favorite in The Belgariad, Magician’s Gambit does include a few of my favorite moments and meetings in the series – mainly with Mara! Just another example of an awesome fantasy novel, one of the best in my opinion, and of Eddings’ excellent writing ability. I recommend the series! Definitely.