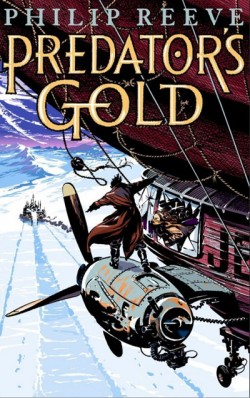 Published: 2003, September by Scholastic
Genre: dystopian, sci-fi, steampunk Age: 13+
Synopsis: Fleeing from an Anti-Tractionist sect, the Green Storm, Tom and Hester are left drifting in the frozen Ice Wastes, slowly dying of cold after the Jenny Haniver's engines have failed. They are saved at the last minute, finding Anchorage, a once-beautiful ice city that has fallen on hard times. Crippled by plague, there are barely fifty souls on Anchorage now, and the teenage margravine has made a desperate choice. They are heading for America, the Dead Continent...

Two years have passed since London destroyed itself in the cataclysmic events of Mortal Engines. For Tom and Hester, two years of plenty; they have been carrying passengers and cargo to and from cities, and as well as prospering financially, their relationship has grown and matured. Then, out of the blue, they are chased by some airships belonging to the Green Storm, a dangerous new anti-tractionist group. The Jenny Hanniver has been made un-flyable. Tom and Hester must find somewhere to stop and land. And they have… Anchorage is a delightful small city in need of business. There is only one small problem; the Margravine of Anchorage seems to have fallen in love with Tom- and Hester is not happy. The events that follow will change Anchorage’s peaceful history…

If you’ve read Mortal Engines, you’ll know how fantastic a book it is, and you might be worried that a sequel could not trump the concepts that drive Mortal Engines. Well, fear no more, for Predator’s Gold is book two of four, and it as thrilling a read as Mortal Engines was, if not even more exciting…

Although being a far more characterised story than Mortal Engines, Predator’s Gold is supplied with a steady drip of exciting action sequences and conflicts that carry right through the novel. It might not have some of the tension that Mortal Engines had; this is due, I think, to the not quite so heroic storyline, but Predator’s Gold seems all the more gritty, particularly with Hester, who’s personality is developed further.

Indeed, I enjoyed the characters far more than I did in Mortal Engines… There are some interesting character developments, and the conflict and rivalry between the characters is particularly good, and very real. Tom, also, becomes slightly more real, but the jewel of the book is still Hester; while Tom as a character has developed, Hester is a fantastic creation, and quite original. Tom’s lack of depth if character is easily overlooked, however, as the attraction towards these books has always been the stunningly realised world building and surroundings.

In fact, the world building that debuted in Mortal Engines is with some of the best I have seen. The raw imagination that went into realising the WOME (World Of Mortal Engines) must have been extortionate; there are realistic historical elements, fabulous moving cities, fascinating gadgets; indeed everything seems to be included so well into the story that you never wonder how something occurred or wonder if event x was a plot hole. Reeve displays some of the best world building skills I have seen, and this shines through all his books set in WOME.

If you read my Mortal Engines review, you’ll know that I read the series about 2 years ago. At that time, I was 11/12, and I was enthralled by them, but I never thought of Predator’s Gold as good as book one. My opinion has changed, though. I adore the romantic thread that is woven into the plot line, and I think it is this that I enjoyed far more now than I did then.

Phillip Reeves’ narrative is great, too… He has an oddly artistic style; not surprising, really, when you think that Phillip Reeve is a great illustrator. This artistic prose is vivid, and yet not slow that it would prevent from you enjoying the action. Sometimes it may slow the flow slightly, but I can only blame that on the fact that I wanted to find out how everything would work out!

Predator’s Gold is a great novel continuing to tell the story of Tom and Hester’s lives… It truly deserves to be classed as some of the greatest YA fantasy sci-fi around, and us a great read for all ages; I can guarantee that whether you be 10 or 50, you will find some thrilling adventure in this book.