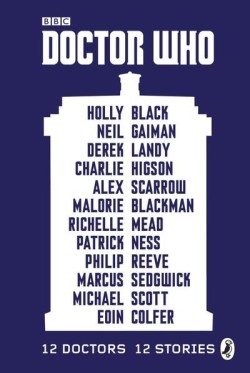 Published: 2014, October by Penguin
Genre: sci-fi Age:
Synopsis: When the Fourth Doctor takes Leela to visit an immense tree space station known as the Heligan Structure, little do they know that the tree has been asleep for centuries, dreaming of vengeance against a man in a blue box… As the tree awakes, the Time Lord and his companion soon discover why they are such unwelcome guests.

It’s hard to capture the enigma that makes Doctor Who such a successful and engaging watch: there’s something very precise and specific that make the iconic character so familiar. It seems to be challenging enough to write the scripts for the show itself (though I do approve the direction the current series is taken) – let alone having to translate it to the page. Reeve’s brief adventure with the 4th Doctor – Tom Baker – is a good start, but it left me wondering if short stories are really an effective expansion of the Doctor’s universe – much like the TV show the episode is over before it has already started, and whilst it works on screen, it’s a different matter on page.

That said, Reeve’s premise is spectacular – giant trees called Heligans designed to float in space and terraform barren worlds – and there are moments when Reeve really captures the essence of the Doctor – “Sometimes he was like a child, sometimes a god. Often he seemed to be both at once.” If there are times where the dialogue feels a bit stinted (I suspect because it mimicked too closely the patterns of the show in the 70s), there are others in which the world building is both brief and engaging. As I said earlier, perhaps its closeness to the show means this short isn’t as good as it could be; but as it stands, Reeve’s story is entertaining enough for its short while to carry you over between books.

Do you have a favourite Doctor?
Matt Smith, mainly because he was the Doctor when I first started watching (I came late to the game…) I loved both him and Karen Gillan as Amy Pond, it was tragic that the writing for their series was so bad.

Describe the Doctor in one word.
Mercurial.

If you had a TARDIS where would you go?
This is tough. I think I would want to be surprised – where could it take me? What amazing sights could I see?