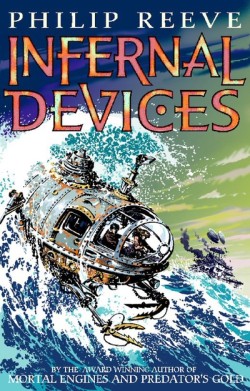 Published: 2005, March by Scholastic
Genre: dystopian, sci-fi, steampunk Age: 13+
Synopsis: Anchorage has become a static settlement on the shores of the Dead Continent, and its inhabitants have been living peacefully for sixteen years. But now trouble is approaching - in a limpet sub, and fast. The Lost Boys are back, and they'll do anything to get what they want. Tom and Hester's daughter Wren is their eager dupe,bored and desperate for adventure. When the theft of the mysterious Tin Book of Anchorage goes wrong, Wren is snatched away in the limpet, who knows where. Tom and Hester set off to rescue her,but this is the end of their quiet life on Anchorage. The journey will stir up old needs, old secrets - and send them back into prilous waters...

15 prosperous years have passed, and Anchorage-in-Vineland is a delightful, growing town, completely secluded from the outside world, thanks to Pennyroyal. But for the first time, somebody has arrived there. It is Gargle, and he seeks The Tin Book; a pre-sixty minute war book, which contains unfathomable codes to perhaps even deadlier weapons than MEDUSA. But not all goes according to plan, and Wren, Tom and Hester’s daughter, is captured and kidnapped…

One of the biggest questions people will ask about Infernal Devices is ‘is it better than Mortal Engines and Predator’s Gold?’ The answer is no. Infernal Devices is not another step up, but rather a small step down. For, although it would make quite a neat book as a standalone, as a continuation of the series it is not as good as it’s predecessors. It’s a shame really; Infernal Devices could have been quite an adventure, but alas, it is not so.

The story, for one, is quite similar to Predator’s Gold in that it is more of a journey; following Wren from Anchorage right through to Brighton. This linear story line makes the beginning quite bland and the end quite exciting (although I reckon the opening paragraph or so is quite encapsulating, but more on that later). Plot points are also quite predictable, and don’t really come as a surprise to the reader, either, and the plot in itself isn’t too complicated. When written on paper, it is quite simple, actually, and thus it isn’t the greatest of Reeve’s works.

Character-wise, we focus on Wren, who is Tom and Hester’s daughter of fifteen years, who you may have read was conceived in Predator’s Gold. Although the relationship between Wren and her parents is interesting, her character is otherwise quite bland, much like Tom’s. As a replacement for Tom and Hester, she doesn’t work as well; and we’re left with a gap, where normally the main characters would be. As a reader, I was yearning to see Tom and Hester in this rather than Wren, and that is a major off put. Theo and Wren also seem a lot like a rip off of Tom and Hester, albeit not having Hester’s personality. It just seems like Reeve has recycled them and given them new names. As such, it was also relatively easy to guess that a romance was going to form (don’t worry, you would have worked it out fairly early on).

I also found Tom and Hester to have changed slightly… I certainly did not find the speech to be that of thirty-odd year olds, but more like what they were in book one and two, and it would be  hard to distinguish had we not been told that they were now in their late thirties.

I mentioned earlier the fact that I rather enjoyed the opening paragraph of Infernal Devices; and although it wasn’t as lovely as in Mortal Engines, it is still a much more captivating first few sentences than Predator’s Gold was. The first sentence, particularly, reminded me of the Biblical creation story, which is what Reeve wanted to achieve, I suppose.

Once again, Infernal Devices features Phillip Reeve’s definitive style of writing; the vivid descriptions and action sequences, which I write about in my two previous reviews. Although perhaps not the strongest book in the Quartet, Infernal Devices is still an enjoyable read, particularly for the fans of book one and two. Reeve’s detailed world is thrilling to read about, and in Infernal Devices we find out even more about the World of Mortal Engines…