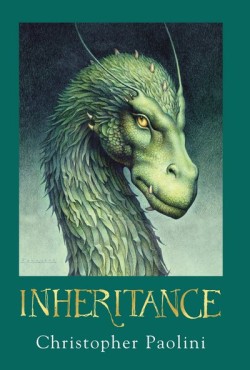 Published: 2011, November by Random House
Genre: high fantasy Age: 13+
Synopsis: It began with Eragon . . . It ends with Inheritance. Not so very long ago, Eragon - Shadeslayer, Dragon Rider - was nothing more than a poor farm boy, and his dragon, Saphira, only a blue stone in the forest. Now, the fate of an entire civilization rests on their shoulders. Long months of training and battle have brought victories and hope, but they have also brought heartbreaking loss. And still the real battle lies ahead: they must confront Galbatorix. When they do, they will have to be strong enough to defeat him. And if they cannot, no one can. There will be no second chances. The Rider and his dragon have come farther than anyone dared to hope. But can they topple the evil king and restore justice to Alagaësia? And if so, at what cost? Featuring spectacular artwork by cult artist John Jude Palencar, this stunning book brings the bestselling Inheritance cycle to a breathtaking conclusion.
Watch the book trailer

The time has come for the final battle. The Varden are marching on Uru’baen, the elves are on their way and slowly, Eragon’s power is building. He is no longer the boy he was- he has becoome a master rider. But only the fates will tell who is to win in the epic clash between Eragon and Galbatoric…

After nearly a decade, the conclusive novel of the Inheritance Cycle (formerly the Inheritance Trilogy) has finally been published. And what a journey- over two thousand pages of epic battles, stange creatures, and magical abilities.

Regardless of whether you think the Inheritance Cycle is derivative garbage or inspirationally original, you can’t deny that Christopher Paolini has, since Eragon, richened the land of Alagaesia to such an extent that it now truly has a mythology of its own. The series has grown from the simple Tolkienesque and Star Wars-ian writing shown in Paolini’s debut novel.

Consisting of 850 pages, Inheritance is the largest volume of the Cycle. It’s a truly epic tome that took me just under a week to finish- and considering that’s a normal school week, I’m really very proud with myself, considering my work load!

Much like Brisingr, Inheritance contains fantasy politics: squabbles between the Varden, Surda, the elves, and the Urgals, and diplomatic meetings between them are responsible for the first quarter of the book. Fortunately, these scenes strengthen the reality of Alagaesia- after all, politics happen everywhere- why not in fantasy? However, the politics can drag on a little, particularly when Eragon isn’t involved.

Roran, Eragon’s cousin, makes a noticable appearance in Inheritance, though I can gladly say he has less page time than in Eldest. Though his adventures are important to the Cycle, I could never connect with him on the same level as I could with Eragon and Arya, and that left me eagerly awaiting the return of Eragon’s point of view. Saphira, as usual, steals the show with her combination of vanity and humbleness, though Nasuada, Arya, Murtagh are also memorable- with Paolini particularly developing Murtagh and giving us an insight into his internal turmoil.

Inheritance had a lot of expectation weighing upon it due to the length of time between the release of Brisingr and Inheritance. Unfortunately, due to this slow release there aren’t that many surprises in the concluding novel. Many of the happenings in Inheritance were foreshadowed and predicted in previous books, so many of the details of the novel were already known. However, when considering its role in the series, Inheritance is less about unexpected twists and turns and more about the coming together of the Cycle as well as the cataclysmic battle between Eragon and Galbatorix. Additionally, Inheritance serves to uncover all the little secrets that Paolini has gifted us with throughout the previous three novels.

I attempted to read Inheritance without expectations that could influence my reaction to the text. Therefore, seeing everything from the Cycle finally together was immensely rewarding, and I think fans will get excited when the secrets of the Vault of Souls finally gets revealed and enjoy the aftermath of Eragon’s inevitable vanquishing of Galbatorix. The novel takes several hundred pages to fully capture the reader’s attention, but once it does you can’t put it down. As for Galbatorix’s character, he’s excellent, and I was impressed with the way Paolini made me sympathise with his cause, if only slightly.

Paolini dedicates the last one hundred or so pages to an account of the aftermath of the final, epic battle. In essence, it’s an extended epilogue, tieing up all the loose ends of the Cycle into a neat little pile. There isn’t much surprise as to who the second Rider is- I won’t give it away- but it’s satisfying to see them finally pick up that mantle. But as the final scene draws to a close – one that may or may not have been foretold in Angela’s prophecy- the realisation comes that Paolini won’t be wrapping everything up perfectly- there are some bitter ends. It would be a poor final chapter if it didn’t make you yearn for more, and I have a hunch that the next few years will see the fanfiction community spawn a whole host of sequels to fully satisfy every reader in a way Paolini didn’t- and shouldn’t- have.

The Inheritance Cycle was the first series that truly got me into reading and introduced me to the fun of high fantasy, over five years ago now. The Cycle has changed over the years, but the central story has remained the same as Eragon in 2002: Inheritance is still the tale of a boy and his dragon.

What did you think about Inheritance?

More in the Inheritance Cycle: