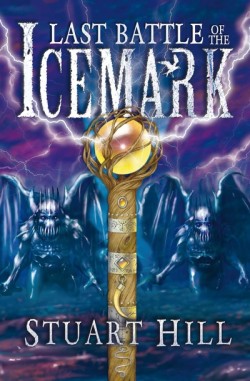 Published: 2008, July by Chicken House
Genre: high fantasy Age: 13+
Synopsis: With her murderous daughter, Medea, banished to the spirit world, Queen Thirrin's tiny kingdom of Icemark has enjoyed a time of pace. But her consort, Oskan Witchfather, fears for their nation - and rightly so. Medea is out for revenge. Allied with the King of the Darkness and his terrifying Ice Demons, the power of evil grow stronger day by day. The dark is rising and the Icemark and its allies must stop it.

The Last Battle of the Icemark is set a few years after the happenings of Blade of Fire; Sharley is now 16ish, and both Oskan and Thirrin are getting into their late forties. In terms of story, however, The Last Battle is quite different. Rather than just being your simple sword and shield battles, The Last Battle now displays the more… elemental and magical side of the imaginary world. Oskan, together with Medea (who hasn’t died – how could anyone think that such an evil being could be wiped out so easily?) and her grandfather Cronus, are far more involved, and offer a different style of battle: magical. Hill has created a plausible magical element, and The Last Battle of the Icemark really fleshes this side of their world out.

The Last Battle of the Icemark reintroduces us to nigh on all the main characters (a vast number, it must be said!), and it’s great to be back! It’s so funny to see the interactions between the characters; Cressida who is madly in love and is finding it hard to cope; Grishmak who, as always, throws around rude jokes at an incredible rate; Oskan whom I still can’t imagine being old- he’ll always be a 15 year old for me! The list goes ever on. My point is that Stuart Hill certainly has a knack of creating characters and making us empathise with them…

That being said, The Last Battle wasn’t all perfect, as much as I would like it to be. For a start, the plot was a bit stringy. Not hard to follow, just slightly convoluted. In fact, the story almost climaxes 300 pages in, rather than in the last few pages where it should. That leads me onto my second point: the in-epic end duel. What I expected was a huge, fantastic magical battle. What we got was a lot less, and I was disappointed. Perhaps it was just me – reading it in chunks makes it bitty, but I didn’t feel the ending as I wanted to. It’s a shame, as the finale was quite a Tolkienesque one, particularly how Hill dealt with all the story lines. It was quite neat too, particularly at the closing of the Vampire Queen’s thread.

All in all, The Last Battle of the Icemark is a very good conclusion to what is a very good fantasy trilogy. The Last Battle increases the scale of the battle (as if it wasn’t big enough before!), but what really makes Stuart Hill shine as a successful author are his characters. I’m not sure how anyone could not love at least one of his creations! This is a deserving last chapter in the epic trilogy, one that brings everything to a satisfying close. Long live the Icemark!