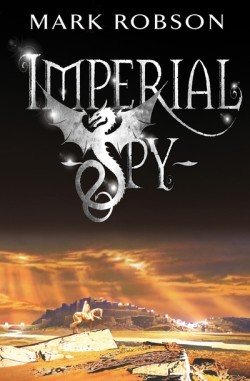 Published: 2006, February by Simon & Schuster
Genre: high fantasy, spy Age: 12+
Synopsis: Femke, a gifted and resourceful young spy, is entrusted with a vital foreign mission by the Emperor. Her adversary, Shalidar, frames Femke with responsibility for two murders while she is visiting their neighbouring court. Femke is isolated in an alien country, being pursued both by her enemies and by the authorities. Only her side-kick, Reynik, a young military trainee, can help. Together, they must outwit the evil assassin Shalidar and prove Femke's innocence so they can complete the imperial mission. This is the first in a new series.

Set in the lands of Thrandor and Shandar, Femke, a spy, has been framed for murder on a much needed ambassadorial meeting. When peace is necessary, this is the last thing you need, and Femke is  trying to prove she did not commit the crime. But the murderer is always two steps ahead…

The fact that this book is in the fantasy genre, may put some of you off, with hundreds of cliched high fantasy novels around. There’s no need to worry, though. Imperial Spy is highly original, and certainly I have never read anything similar, and I am well read in the fantasy genre. This isn’t one of those hero-farmboy vs evil lord which result in an epic battle, it is an intresting rivalry that involves trickery, revenge and a lot of wit.

I found all the main characters, especially Femke, well developed, especially as they were not your standard characters. I would have, however, liked to see a bit more of Reynik, especially in the beginning, as he seems very intresting. No doubt that we will see him in future books. I think Lord Danar’s character is wonderfull- Mark Robson has done a very good job.

The first few pages are very gripping, and intresting. They have nothing to do with the rest of the story; it is setting up for it. They also don’t reveal the whole plot, which is good, as this keeps you on your feet all the time. It was very hard to predict what was going to happen next, even after all is explained three quarters the way through, because there are so many twists and turns.

However, one thing that I would like to say is that the thoughts are not in italics! I know that is more of an editing problem, but it would make it much easier to read.

More in the Imperial Trilogy: