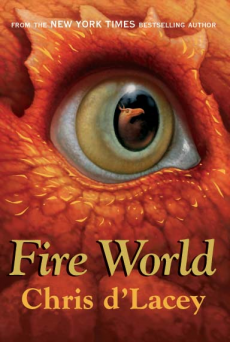 Some of you may be familiar with the Last Dragon Chronicles by Chris d’Lacey (The Fire Within etc). I’m a huge fan, and follow Chris’ blog quite avidly, and today the cover and blurb of the most recent novel in the series were released! Very exciting, I think. Anyway, for those of you who don’t know, the new book is called Fire World and is published on the 6th of January. Anyway, without further ado, indulge yourself in the lovely artwork that is the cover:

I think it’s very nice, although Mr Dragon looks like he’s on drugs!  Still, the ‘Fire Bird’ in the dragons eye intruiges me….whatever could that be I wonder.

Aurielle looked at the woven picture and sighed. So beautiful, with its wide green hills and its dragons flying gracefully around the valley. And yet so menacing, too. It seemed to tell the story of a great battle… But what did it mean?

In the great librarium on the world of Co:pern:ica, an ancient tapestry, guarded by firebirds, is about to have its secrets unravelled – a process which will bring together the ec:centric boy, David, the evil Aunt, Gwyneth, and a dangerous force from the other side of time… Isenfier is about to begin, and the worlds around it may never be the same again…

According to the author, “Aurielle is the firebird in the dragon’s eye, and Isenfier is the name given to the battle that David and the dragons had with darklings over the Vale of Scuffenbury.  The rest you will just have to wait for, sorry…  Until next time.  Happy reading.  Hrrr!”

If you want to read more of what Chris d’Lacey has to say about his newest book, I recommend you go to is blog.

What did you think about Dragon fans, look out!?