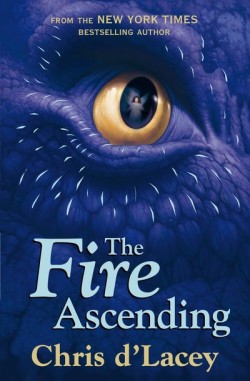 Published: 2012, April by Orchard Books
Genre: fantasy Age: 12+
Synopsis: Guaranteed to be incredible, fantastical and the ultimate page-turner, this final title in The Last Dragon Chronicles brings together the amazing characters and wonderful worlds that Chris d'Lacey has drawn on throughout the series - in one stunning finale.

Before the secrets of the tapestry of the battle of Isenfier can be discovered, first, we must tell of the legendary Agawin, a young boy in the prehistory of time, when dragons still roamed this earth in all their magnificence. He shall tell of the quest for the last dragon, Galen, and his guard high up the mountain peaks of Kasgerden, ready to shed his fire tear and return his auma to the eternal fire of Gaia. But before even that comes his battle with Voss, the evil, Ix-infested premen…not all shall be well.

The Last Dragon Chonicles have come a long way from the innocent, mundane tales of The Fire Within, when we first meet David Rain and the Pennykettle family. Perhaps more than any other series, d’Lacey’s creativity can be traced and followed from the humble beginnings of a childrens’ story to an epic, universal struggle for survival in the later novels- and this, potentially, is The Fire Ascending‘s greatest strength as it closes just over 10 years of publication of the Dragon novels.

As always when there is a change of direction in story telling, some readers might be disappointed by the continuation of the “epic” storyline that started, arguably, in Fire Star. For myself and I suspect many others, the characters of Liz, Lucy, David and Zanna are what made the series and brought the novels to life; their undiluted eccentricity that borders on hilarity as well as their escapist “fantasies” of dragons. Whilst they do reappear in that lovely form, it is but a moment, though melancholy and rather fitting as their farewell.

Unlike Fire World, which could (and has) been seen to stand alone as its own novel, The Fire Ascending ties together the narratives that weave in and out of each other in the Last Dragon Chronicles, and as such, can only really be understood when all of the previous novels have been read. In that light, I will not even attempt to introduce the novel other than to say that it follows the battle of Isenfier and Agawin, as well as Rosa and the destiny of Co:pern:ica, all of those terms you will understand if you have read the previous novels (which you should- I highly recommend it).

As d’Lacey so cleverly says in one of the last parts of The Fire Ascending, the Last Dragon Chronicles have been written “organically”;

“Meaning that they should come out as they wanted to. Unplanned.”
“Yes. This is why there are some loose ends or seemingly impossible complexities in the stories: they reflect the nature of spontaneous creation, the chaotic universe of a writer’s mind.”

And on that note, I will hold my tongue and let The Fire Ascending speak for itself: thank you, Chris d’Lacey, for writing these novels.

What did you think about The Fire Ascending?