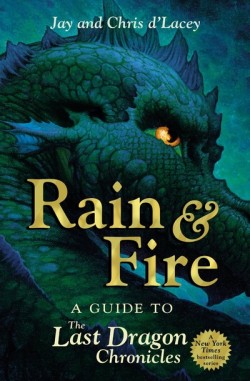 Published: 2010, October by Orchard Books
Genre: companion Age: 12+
Synopsis: This intriguing and entertaining guide will not only appeal to all fans of best-selling series The Last Dragon Chronicles, but will also appeal to everyone with an interest in dragons! In a collaborative work between Chris and his wife Jay, the book features character profiles, information on backgrounds and settings in the series, and explores relevant themes such as climate change. It includes stunning illustrations and photographs and is a book that everyone can enjoy, dip into, and indulge their passion for dragons!

Rain and Fire isn’t a ‘real’ book, so I can’t really give a full-blown review, but I’ll try my best!

Written by Chris d’Lacey’s wife, Jay, Rain and Fire is a guidebook to The Last Dragon Chronicles, written by Chris d’Lacey. Rain and Fire has a glossary of terms, something that I’m sure many fans will find very useful, particularly before reading Fire World, the next book due. Character biographies and other such things also feature in Rain and Fire, although most of it is more of a narrative of how The Last Dragon Chronicles came to be, what they mean, and various bits about the author himself.

For fans of the series, I’m sure that Rain and Fire will be very interesting; it’s very much like the behind-the-scenes features on a DVD. For those who haven’t read the series though, Rain and Fire will seem odd and irrelevant – and I suggest you start reading The Fire Within, which is the first novel in the Chronicles.

No doubt, when I come to read Fire World, and the as of yet unnamed 7th book, I will be referencing Rain and Fire all the time; particularly the glossary of terms, as d’Lacey is almost scientific in his use of specialised ‘dragon’ terms. It’s also freshened my mind in preparation, and since it’s been a year and a half since Dark Fire came out, I was due for a re-freshening! For fans, Rain and Fire will be a useful companion, and I highly recommend buying it (it even contains a picture of David! I’m such a tease :P).