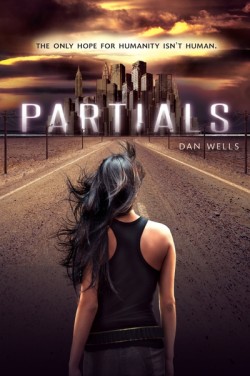 Published: 2012, March by Harper Collins
Genre: post-apocalyptic Age: 13+
Synopsis: The only hope for humanity isn’t human. In a world where people have been all but wiped out by a virus created by part-human cyborgs called ‘Partials’, and where no baby survives longer than three days, a teenage girl makes it her mission to find a cure, and save her best friend’s unborn child. But finding a cure means capturing a Partial…
Watch the book trailer

As part of the Hope Act, every woman aged eighteen and over is legally obliged to conceive.

None of their children will survive.

At a time when dystopia in YA is booming, Partials couldn’t have come at a worse time. Or could it? These days, readers really have to push to find the good dystopia amongst the mediocre, but it’s refreshing to see a novel that isn’t dystopian because it wants to be or because it’s cool but because it’s actually part of the story- vitally so. And it isn’t fully dystopian either- amongst the rubble are the glimmerings of sci-fi adventure, though admittedly not the space-trotting, star-bending sort. Yet.

I’m probably not the only one who has been eagerly awaiting Dan Well’s next forage into the world of YA after his superb John Cleaver Trilogy– Wells has garnered himself a whole lot of readers as well as a whole bunch of fans fans (myself included). But is Partials a step too far from his Sociopathic, demonic horror series?

The answer is, maybe. Partials is a delicious and juicy new series, focused less on the dystopia than the science, less about the characters than concepts and ideas. Less of the schmalz. Less of the totalitarian regime (though certainly, there is a sprinkling of that too) and more of the, let’s kick some butt to save humanity awesomeness (with SCIENCE!).

Partials is split into several clear-cut parts. The first 100 pages introduce us to a world eleven years past a huge war and viral outbreak that decimated 99.996% of the population. It takes us to the only known center of human survival on Long Island, a population so desperate for survival that it is legally required that every woman, capable of bearing a child, be pregnant. The population must be stabilised. But it’s not working: every newborn dies of RM, a manufactured virus that culled the human population after its introduction. These pages introduce us to sixteen year old medic Kira, a girl with dreams. Dreams of curing a crippled nation. Kira is strong-willed and dedicated: she would sacrifice herself in the hope of a cure. And like all good characters, Wells knows that strengths can become weaknesses very quickly when a character is pushed. With Kira, her strengths can become her weaknesses, her determination her downfall. However, I did struggle to become invested in Kira fully, particularly at the start of the novel, which hindered some of the more, shall we say, risky actions she took.

From there on, Partials graduates from phase to phase, from helplessness to hope, action to consequence to determination. Each phase increases the pressure and boosts the pace from the relatively mundane first 100 pages to the breathtakingly explosive last 100 pages, and as the book progressed I found myself increasingly absorbed and taken in by Kira’s selfless zeal and the ever-increasing danger that she brings upon herself.

Though Kira is the protagonist of Partials, it was not with her that I felt the deepest connection. Samm, the Partial boy, was by far the most intriguing, testing the limits of our trust and cloaking himself in mystery. His interactions with Kira are by far the juiciest character moments of the novel, interspersing the otherwise vivacious plot.

Partials proves one thing: that Dan Wells is definitely not a one trick pony. Wells is perfect at creating a visual narrative full of set-backs and improvisation that many novels lack: it’s exciting, filled with thrilling (pseudo-)science and politics and more guns than its fair share. Though it doesn’t resonate as much as the John Cleaver Trilogy, predominantly because it’s very hard to be wholly original in YA dystopia right now, Partials is a definite yes when it comes to worthwhile reading, particularly once you get into it.

More in the Partials: