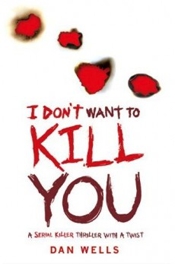 Published: 2011, January by Headline
Genre: horror Age: 14+
Synopsis: Sixteen-year-old John Wayne Cleaver has always known he’s different, but not because he only has one friend (and doesn’t much like him) and not because he regularly helps out in his mother’s mortuary. He’s different because he recognizes the classic signs of an incipient serial killer in his own personality, and he’s created a rigid set of rules to follow to keep his darker nature, the one he calls Mr Monster in check.

John Cleaver isn’t exactly normal. He’s a self-diagnosed sociopath, trying to keep out of touch with his dark side. He’s a killer at heart, but doesn’t want to give in to the monster inside him. Trying to be normal is getting harder and harder- he’s already killed two people. That is, if you can call them people. John likes to refer to them as ‘demons’, and he isn’t far from the truth; both his previous victims were serial killers, murdering endlessly to satisfy their demon selves. And now that he’s killed them, he wants to get to the root of the problem. He’s enticed their leader, Nobody, into his home town. She hasn’t come alone. Another serial killer has also arrived, and John must deal with them both before they can ruin too many lives….

As a reviewer, I am exposed to quite a variety of novels. Some of those will be good, some average, and some, sadly, disappointing. But every so often, I come across a novel that is outstanding; and I Don’t Want To Kill You is such a novel. Since reading I Am Not A Serial Killer and Mr Monster in early 2009, I knew Dan Wells (a lovely guy, by the way- I met him in April ’09!) was onto something, something fantastic. I Don’t Want To Kill You is the third and final novel in the John Cleaver Trilogy, and is a worthy follow up to the critically acclaimed first and second novels.

It’s not often that I come across such an outstanding novel- and I’m pretty sure both I Am Not A Serial Killer and Mr Monster were both very full filling to read. I expected I Don’t Want To Kill You to be just as good. It was better. Incredibly so. It’s hard to raise stakes that are already very high, but Dan Wells has managed it. Everything- from the spell-binding characters to the grim premise to the fast-paced plot has been carried over from books one and two, and have seemingly improved.

I’m probably repeating a lot from my reviews of the previous two books, but it’s hard not to- they’re all very similar (in a good way, of course!). For a start, the characterisation is marvelous. John Cleaver, the sociopath who doesn’t want to be a serial killer, is one of my favourite characters. He’s so real, so tangible, that you start wondering how much of Dan Wells is in him (lets hope the similarities end with the fact that both are intrigued by serial killers!) Dan Wells presents John Cleaver as our unlikely hero; incredibly flawed, but with his heart in the right place, most of the time. He can be terrifying, but also funny and heart-warming. As with all good characters, he isn’t perfect, and never before has imperfection been so perfect! As you would expect, the rest of the characters, too, are incredibly realistic…Dan Wells is a master of characterisation.

As you would expect from the culmination of a trilogy, I Don’t Want To Kill You ups the stakes in terms of story; humanity, including those closest to John Cleaver, are at risk from not one, but two killers. And one of them isn’t a demon…forcing John to make a decision about his sociopathy. If you thought the two previous novels were packed full of adrenaline and tension, just wait until you feast your eyes on I Don’t Want To Kill You. Dan Wells takes horror-come-psychological thriller to a whole new level.

As you’ve probably noticed, I was thoroughly taken aback by the sheer awesomeness of I Don’t Want To Kill You, and I promise I’ll stop typing after this paragraph! If you’ve already read I Am Not A Serial Killer and Mr Monster by Dan Well, be prepared to read one of the best books of 2011. If you haven’t read either of those, and wondering why I’m raving so much about this series, all I can say is get a move on and get your hands on a set of the trilogy! The John Cleaver Trilogy is a must read, even if you are an adult. Just be prepared to be grossed out!