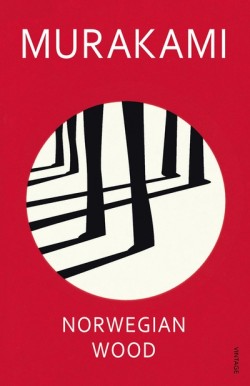 Published: 2000 by Vintage
Genre: adult, bildungsroman Age: 16+
Synopsis: When he hears her favourite Beatles song, Toru Watanabe recalls his first love Naoko, the girlfriend of his best friend Kizuki. Immediately he is transported back almost twenty years to his student days in Tokyo, adrift in a world of uneasy friendships, casual sex, passion, loss and desire - to a time when an impetuous young woman called Midori marches into his life and he has to choose between the future and the past.

Norwegian Wood might be most famous as the song by the Beatles, but there’s also a Japanese book to which it lends its title. Considered the book that everyone in Japan has read, Norwegian Wood is what author MG Harris calls Murakami’s most Western novel, and I’m inclined to agree. It would be easy to remove the Japanese names and be left with a book that could be easily mistaken for any one of its American counterparts. It’s intentional, I think, as Murakami frequently references The Great Gatsby and The Catcher in the Rye – two books that Norwegian Wood definitely isn’t but certainly owes debts to, if only for establishing the genre it participates in: the bildungsroman (coming of age novel).

@FictionThirst Murakami is *very* westernised. He translated lots of US authors and is steeped in western culture. Other bks more Japanese.

Late 60s Tokyo is the setting for the novel, in which university student Watanabe’s relationship to Naoko forms the backbone of this narrative. Starting in suburban Japan with his initial encounter with her via best friend Kizuki, their lives intersect again in a chance encounter one year after the suicide of their lover and friend. Going on cathartic walks together every Sunday, the two grow closer, sharing their lives with one another as they struggle through two very different issues: depression and existential angst.

Norwegian Wood isn’t considered a young adult book; its explicit sexual references and descriptions blow it out of that particular pond, but it can easily be seen as the progression from John Green’s novels (thematically, rather than chronologically!) Marakumi’s characters are perhaps a little more complex than Green’s, whose females have been criticised for being Manic Pixie Dream Girls, but at its core Norwegian Wood is a story of a young man caught between the affections of several female friends and lovers. His exploration of mental illness is more explicit yet sensitive, and Norwegian Wood treats depression and suicide without limiting its characters to only those facets. It’s a book well worth reading, both for its similarities and differences to the American bildungsroman.