2014 has been both a great and disappointing year for my reading. In many ways, it’s a year of quality over quantity, which is pleasing; yet I was hoping I could complete more than the 28 I did. I suppose completing my A Levels and working on a big theatre project didn’t help!

This year I notably also started a fair few books I didn’t finish, not because I don’t think I’ll like them but because I just didn’t get on with them at the time (I’m a firm believer in right place/right time for my reading; sometimes a narrative just won’t click with me when I first attempt it but I’ll love it another time). Amongst these books were Messenger of Fear by Michael Grant and Skulduggery Pleasant: The Dying of the Light by Derek Landy, two books I was HUGELY excited about; as well as sci-fi Conquest by John Connolly and Jennifer Ridyard and sort-of-paranormal Between the Devil and the Deep Blue Sea by April Genevieve.

All cover images link to my reviews (if published).

January began with a bang as I feasted on Burn by Julianna Baggott – the third and final instalment in the Pure Trilogy which has become one of my favourite dystopian/post-apocalyptic series. Baggott has a knack for great characterisation coupled with unbelievably good prose. I continued with short story collection How They Met by David Levithan – lovely, sweet and tender if you’re up for a few cute stories about blossoming relationships. And, of course, there are plenty of LGBT characters; a definite plus! The month ended with the human story of Salvage and the fantasy elements of Hollow City, which was a nice contrast.

The Things We Did for Love was a book I picked up after meeting Natasha Farrant (the author); it’s not one I reviewed for several reasons, mainly because I was away from home at the time and never got around to it (shame). February was a slow month thanks in part to exam mocks; but I did manage to devour the superbly fantastic Grasshopper Jungle which is my favourite book of 2014; it’s truly astounding and here to stay, I think, as Andrew Smith’s reputation as a genius writer blossoms in the new year with further releases and the hope of developments of the film adaptation.

My luck didn’t change after finishing Grasshopper Jungle because I subsequently read Half Bad by Sally Green, a marvellous witchy tale that would have made J.K. Rowling jealous (yes I went there!) Also experimental 2nd person; big thumbs up. Trouble was up next which, apart from being the debut novel of my buddy Non Pratt also revolved around a Juno-esque teenage pregnancy; this time with a twist, so that was good. March was also the month in which David Levithan’s Two Boys Kissing was finally published in the UK; I couldn’t get away with not reading it! It was lovely to end the month with Catherine Bruton’s I Predict a Riot; I’m a fan of her writing and her third novel is a lovely/tragic exploration of the London Riots.

Just one book this month, and I can’t quite remember why. I managed to read the finale of Young’s epic dystopian trilogy early and was able to ask her lots of questions in my interview with her.

I couldn’t not read Smith’s Winger having loved Grasshopper Jungle so much in February. And yes, Smith deserves punishment for what he did to my emotions.

Exam season begins so I’m back to just a couple of books; this time We Were Liars, which got so much hype that I read it just to see what all the (largely deserved) fuss was about. Then a brief throwback to my early teenagehood with the prequel to one of my favourite high-fantasy series, The Chronicles of the Icemark.

Sand and Zero Hour are undoubtedly standouts here; lost worlds in the former and vampires in the latter.

My theatre project took over my life at this point but I still managed to get through the raucously British rom-com Lobsters and catch up with one of my favourite middle-grade series about a young detective in the Wild West.

I normally love to read whilst travelling but it just didn’t click as I worked my way from Prague to Istanbul with some friends. Red Rising finally managed to pull me out of that lull with its off-world dystopian plot; I quickly followed it up with the ghost-busting sequel from Stroud’s Lockwood & Co series. Then my kindle broke and I was marooned and all hope was lost. Sob.

After a long while of nothing (and trying various books), I eventually got back into the groove with a recommendation from M.G.Harris: Japanese modern classic Norwegian Wood, which you could easily describe as the Japanese version of Catcher in the Rye, except it’s less whiny, more sexed-up and generally better…(controversial, I know!)

I managed to whizz through these three phenomenal contemporary/coming-of-age novels in a jiffy. All three deal with serious issues, though Simon vs the Homo Sapiens Agenda is arguably the lightest of the three; Last Leaves Falling and All the Bright Places both deal with mortality and are both tragically sad (in a good way). It was nice to end 2014 with three books that would kick off the YA scene for 2015 – especially as they’re all so good. 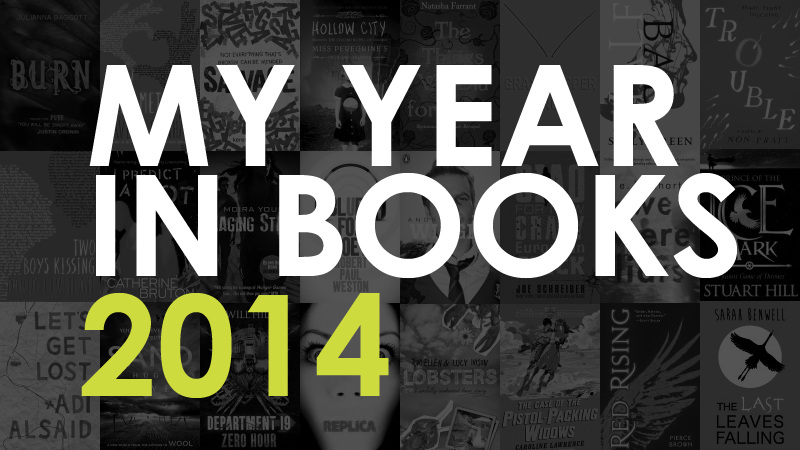