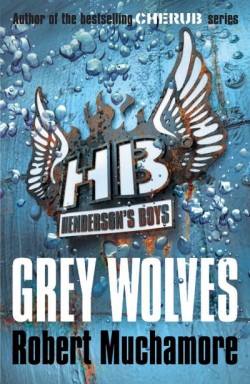 Published: 2011, February by Hodder
Genre: action, historical, spy Age: 12+
Synopsis: Spring, 1941.German submarines are prowling the North Atlantic, sinking ships filled with the food, fuel and weapons that Britain needs to survive.With the Royal Navy losing the war at sea, six young agents must sneak into Nazi-occupied Europe and sabotage a submarine base on France's western coast.If the submarines aren't stopped, the British people will starve.

After spending several months in Britain training to be spies, Henderson’s espionage group is ready to embark on a multi-month mission in occupied France. Their mission: to seek out ways of disrupting the German U-Boat (submarine) programme, a venture that is slowly pushing Britain back from their command of the oceans. It’s dangerous but necessary, particularly now as the German forces renew their clash with Britain. The sabotage has to be discreet, otherwise there will be consequences. But just how discreet can the six kids make it? All hell shall be unleashed…

I often hear friends of mine saying that Henderson’s Boys isn’t as good as the original CHERUB ever was- and I’m inclined to disagree with them. After 12 novels, CHERUB was getting incredibly repetitive, and setting a teen-spy novel against the backdrop of the 1940s makes it uniquely different to most teen-spy series. The war-time spin allows for a continuous thread to span throughout the novels, and really helps in bringing them together and making them feel less episodic. Apart from that, it’s a lot more fun to see “proper” and potentially deadly overseas missions occurring.

Grey Wolves is written in the typical, bare-bones descriptive style of Robert Muchamore. I can’t really complain; his style gets the job done, and pushes forward the action with precision. I don’t expect my spy novels to be written with much artistic language, and Muchamore’s direct style allows him to connect with the reader, especially the teenage reader. After all, I don’t read a spy novel for the prose but for the thrills I’ll get from reading fast-paced, gritty action.

That being said, Grey Wolves is far from perfect, notably in the speech. You can call it part of Muchamore’s style all you like, but what I found incredibly annoying whilst reading Grey Wolves is the falseness of the speech. Characters almost always say things that all the characters already know, purely for the benefit of the reader. For example, at one point Henderson, the commander of the operation, tells the kids to be quiet because “the Germans are on high alert”. No shit, Sherlock! The kids have just raided a submarine base and killed over 200 people with at least 200kg of explosives. On top of that, these kids have had several months of training. You’d think that after a huge explosion, the kids would know that everything was in a state of high alert. Muchamore handles these things so unsubtly, it’s almost spoon-fed. I, for one, would like to see more subtle dialogue and more hinting of events. That way, the novel would be far more suspenseful and thrilling.

Once again, Muchamore manages to successfully create a thrilling, adventurous read that is unique from many teen-spy novels. The historic spin is enthralling to read about, and ups the stakes considerably. Henderson’s Boys is one series that will get guys reading, particularly if they don’t otherwise enjoy it. These novels have everything from high-octane action to a little romance and swearing. What more could anyone need?!

What did you think about Grey Wolves?

More in the Henderson's Boys: