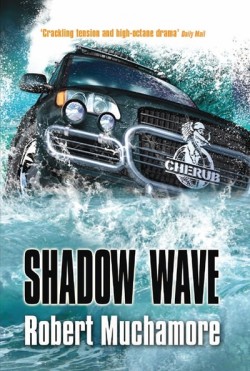 Published: 2010, August by Hodder
Genre: action, spy Age: 13+
Synopsis: After a tsunami causes massive devastation to a tropical island, its governor sends in the bulldozers to knock down villages, replacing them with luxury hotels.Guarding the corrupt governor's family isn't James Adams' idea of the perfect mission, especially as it's going to be his last as a CHERUB agent. And then retired colleague Kyle Blueman comes up with an unofficial and highly dangerous plan of his own.James must choose between loyalty to CHERUB, and loyalty to his oldest friend.

It’s James Adams last mission. At seventeen, he’s ready to leave the child-spy operation and make a life of his own, albeit with a lot of financial support from CHERUB. James doesn’t want to leave quietly. He wants to leave with style. When ex-agent Kyle returns with dangerous plans of his own, James is all for it: he’s got nothing to lose…

The final novel of the CHERUB series, Shadow Wave closes a twelve-book-cycle. I’ve been a fan of CHERUB since I discovered them when I was twelve, and I had high hopes for James’ last mission. Sadly, Shadow Wave is a disappointing end to something that deserved a action-packed and thrilling finish.

The CHERUB novels have always been boy’s books: full of action, easy to read and a down to earth manner have made them very popular at my school, an all boys school. They manage to pinpoint teenage boys well, and don’t shy away from all the ‘uncivil’ things guys do: bad language, sex references and just general boyishness. Unlike many modern novels about teenage boys, CHERUB doesn’t try and make a fifteen year old what he isn’t, something that I believe many guys find very patronising.

Shadow Wave is supposedly James Adams’ last mission, and for that, he actually makes a very minimal appearance. I was hoping for a thrilling sequel to the Brigands MC story. Instead, we’re left with a preachy message and James seems to be a sideline. In fact, fifty percent of the book takes place in Malaysia, with the absence of James. Without knowing where this leads, the reader is left bored and wondering what this has got to do with James’ last mission. This is the greatest disappointment. While I do realise that Robert Muchamore was trying to bring back some of the characters we saw earlier on in the series, this IS the last book, and we won’t be seeing James Adams again, and James, after all, is what makes CHERUB what it is. It isn’t even a ‘proper’ mission, which I found really disappointing, particularly after the last few books, which had some great missions.

For a CHERUB novel, Shadow Wave is also unusually preachy; something, I can tell you, guys hate with a passion. Fifteen year olds don’t read CHERUB for moral gratification, but because of the action and it’s gritty realism, and making the story about the dark side of the Tourism was a bad idea, especially after the manly biker-plot in Brigands MC.

The only rewarding part of the story is the beginning, where it’s actually centred around James completing the Brigands MC mission. If only the book had continued this threadline, all would have been good.

As a fan of the series, I was really hoping for a bumper ride. Instead, Shadow Wave is a disappointment that doesn’t even focus James. While I respect Robert Muchamore for trying to make people aware of the dangers of tourism, the way he has pulled it off is preachy and not in the CHERUB style. I’m sorry to say, but this could have been a much better climax to the series.

More in the CHERUB: