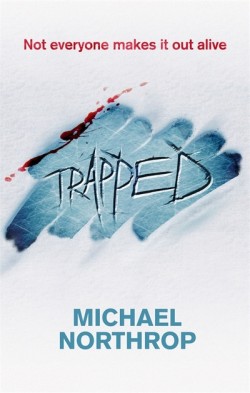 Published: 2011, December by ATOM
Genre: horror, post-apocalyptic Age: 13+
Synopsis: The day the blizzard started, no one knew that it was going to keep snowing for a week. That for those in its path, it would become not just a matter of keeping warm, but of staying alive . . . Scotty and his friends are among the last seven kids at their high school waiting to get picked up that day, and they soon realize that no one is coming for them. Still, it doesn't seem so bad to spend the night at school, especially when Krista and Julie are sleeping just down the hall. But then the power goes out, then the heat. The pipes freeze, and the roof shudders. As the days add up, the snow piles higher, and the empty halls grow colder and darker, the mounting pressure forces a devastating decision . . .

You know things are bad when it starts to snow heavily and doesn’t stop, the power goes out and the heating dies, and the roof groans under the weight of the snow. You know things are even worse when you’re stuck in a high school, nobody knows you’re there, and nobody can save you…

The nature of survival novels such as Trapped is that often they’re a better idea in theory rather than in practice. There just isn’t space for originality. The only way a Day-After-Tomorrow-esque story like Trapped can progress is from bad to worse, from problem to conflict and salvation. Due to these limits, Michael Northrop doesn’t have much leverage when it comes to defying expectations.

The basis of all good novels is conflict- between characters, in the story, anything- but Trapped just doesn’t have enough of it. Sure there’s the little bust up between Pete, Scotty’s friend, and Les, but that’s really not enough, particularly when it’s not really covered and only told through second-hand speech. There weren’t many huge disputes between the group of seven high schoolers, and the ones that existed weren’t engaging or long-lasting. In short, there just isn’t enough happening to make it a thrilling or exciting read. Trapped is an all too realistic story where sitting around and waiting for rescue takes up the majority of the story.

Trapped also ends all too swiftly, which left me feeling robbed. I was expecting a climax where everything would come together, but instead the ending was unsatisfying and empty. What’s the point of reading a novel that builds you up (even if only a little) to expect a climax which ends up being non-existent?

One thing I was impressed with was Northrop’s grasp of a typical teenage boy. There are just a few nuances, but they really help create an authentic atmosphere. The girls on the other hand were underdeveloped; the only reason they seemed to exist was as sex objects for the boys to crush on. It would have been nice to see some extra character development in Trapped (and there was more than enough time to do that). However, Northrop still manages to make a set of believable characters with (some) development as the novel progresses.

In the end, Trapped is a good novel that ends just as things get exciting, dumping us into an anticlimax that is unsatisfying and unnecessary. There’s also a consistent lack of conflict that means that most of the novel is predictable and un-enticing. I can recommend it as a passable novel, but above that Trapped is way out of its league. If you like survival-type novels, you might want to give this one a try. If not, find another book.