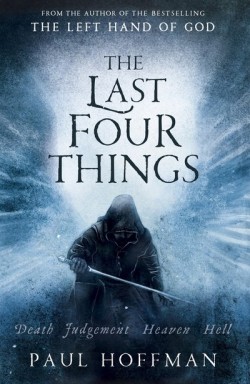 Published: 2011, April by Penguin
Genre: high fantasy, historical fantasy Age: 16+
Synopsis: 'You're the right colour for the Angel of Death, Mister Cale. But a little short.' 'I could cut your head off and stand on it. Then I'd be taller.' Return to the Sanctuary of the Redeemers. A place of pain, cruelty and terrible, dark devotion. Thomas Cale - the Left Hand of God, the Angel of Death - is put in charge of an army and groomed to bring about the end of the world. But might not Cale - killer, strategist, pawn and boy whose nature is far stranger than even the Redeemers can know - have his own reasons for bringing about the Last Four Things? DEATH JUDGEMENT HEAVEN HELL

Recaptured by the Redeemers, Cale’s taste of freedom is short-lived. His only escape from the hold Bosco has on him is to do his bidding- and become the wrath of God on this destitute Earth.

Even the best reviewer isn’t always faultless, and I must admit that as I reviewed The Left Hand of God,  the novel of which The Last Four Things is a sequel to, I probably wasn’t at my best and I misjudged it. In an attempt to rectify that, I hope this review paints a more accurate picture not only of the sequel but also of the series as a whole – particularly the elements of a novel that carry through such as the writing style and themes contained.

Once again the novel follows the life of Thomas Cale, now recaptured by his one-time masters the Redeemers of the Sanctuary after his escape to the empire of the Matterazi. His return sees a change in the nature of his treatment, with Redeemer Bosco, one of the more powerful Redeemers, treating Cale more like an equal and the “righteous wrath of God” which Bosco claims his former acolyte is.

As one would expect, The Last Four Things shares similar elements with The Left Hand of God; cold-blooded brutality (Hoffman doesn’t shy away from anything, it seems) set amongst several strategical battle scenes cement the series’ position amongst other fashionably violent novels such as George RR Martin’s A Song of Ice and Fire. Both series also share a knack of “whoring and wenching”- implied sex happens in abundance for fifteen-year-old Cale and his entourage, and Hoffman seems to approach the subject in a manner worthy of its time-setting, which is to say in a time where I can duly imagine the action Hoffman alludes to.

Again, I must stress the delight of dipping into Hoffman’s wonderful observational prose which is both clever, rich and informational. Writing from a “God-view”, Hoffman adds little sardonic comments here and there on his character’s actions and personalities, setting it apart from other dark-fantasy counterparts and making The Last Four Things an absolutely entertaining read, save from the occasional paragraph or two that becomes overly verbose and uninteresting.

Most entertaining of all, however, are Hoffman’s characters; the dialogue is fantastic, giving vivid impressions of personality, though dialogue attribution is somewhat absent at times, which lent me to having to skip back to the last “he said” or “she said” and then work my way forward. The exchanges between Cale and his former master Bosco are particularly entertaining as Cale is sarcastic and evasive and tries to annoy Bosco as much as possible. Cale is as fascinating as ever, his cold-blooded and heartlessness not only being compounded in The Last Four Things but also questioned. The benefit of Hoffman’s third-person perspective is that it allows Cale’s internal motivations to remain generally mysterious, which only made my intrigue for him all the greater. Bosco and Kleist take a more prominent role, and both are developed from their more basic functions in The Left Hand of God. IdrisPukke returns to offer his mocking and wry observations, though he takes a backseat in the novel, leading to an overall depreciation of humour, though there is still plenty enough to have you grinning several times.

One of the criticisms I had for The Left Hand of God was Hoffman’s laziness in world-building, in which he effectively butchered our own geography. I would like to take that back. The use of real-world places and cities offer the reader a point of contact with Hoffman’s world and yet are sufficiently inspired and different that they are fascinating to explore. It also gives the series a very grounded, realistic feel that could otherwise not have been reached had Hoffman populated the novels with fantastical, made up names that bear no significance to the evolution of names of places.

The Last Four Things is a great sequel to an excellent first novel. Though the features that make it so fascinating will also make it very unappealing for some readers, for those who loved The Left Hand of God and those who enjoy dark, grim and violent fantasy novels, The Last Four Things is a superb novel and will have you on the edge of your seat waiting for the final instalment in the trilogy.Thoroughly engrossing in its brutality the nature of the characters.

What did you think about The Last Four Things?