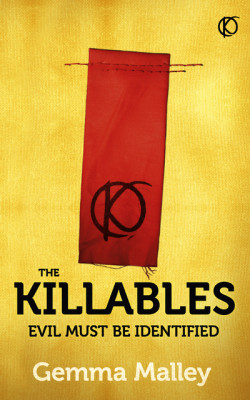 Published: 2012, March by Hodder
Genre: dystopian Age: 13+
Synopsis: Everyone accepted that people were different physically. But inside? Inside, they were different too. You just had to know how to tell, what to look for. Evil has been eradicated. The City has been established. And citizens may only enter after having the 'evil' part of their brain removed. They are labelled on the System according to how 'good' they are. If they show signs of the evil emerging, they are labelled a K . . . But no one knows quite what that means. Only that they disappear, never to be seen again . . .
Watch the book trailer

Evil is a destructive force that must not be allowed to fester the human brain and drive it to madness and corruption. Anyone perceived to display such negative qualities will not be allowed to mix with the general population.

Thankfully, a cure has been discovered. By removing the amygdala part of your brain, your evil inhibitions are removed and you are free to live a good and pure life. Sometimes, the cure fails to work- and for those people there is only one solution: to be labelled a “K” and taken away.

Only a select few know what that really means.

The last few years have seen YA dystopian novels really kick off as a genre, but none more so than this coming year: in which, arguably, the climax of this craze will occur, for better or worse. There are always benefits and drawbacks about genre-crazes such as the one we are about to embark on. In 2008, 9 and 10 it was paranormal romance. Now it’s dystopian. And that means a couple of things: firstly publishers are eager to publish anything that so much as smells like dystopia and in the process sacrifice true selectivity (the consequence of which is that the YA market is flooded with more than enough passable, bandwagon-hopping novels and series). And secondly, that in amongst the averages, publishing houses are taking greater risks in publishing novels they wouldn’t normally because of they’re a little more risky and/or have a questionable commercial value. More often than not, these are the novels of excellence.

It’s easy to write a passable, average, mediocre, uninspired novel. It’s a lot, lot harder to write something that is impactful and potent and powerful. (Evidence for this is the ratio of non-exemplary novels to exemplary novels: I’d say it’s about 2:1 or even 3:1.) The Killables, I’m afraid, is on the wrong side of the ratio.

One of the dystopian genre’s greatest appeals is its acceptance of creativity and unique world building. Suzanne Collins managed it within The Hunger Games as did Julianna Baggott in Pure (which, arguably, is more post-apocalyptic than dystopian but now’s not the time for that discussion…) and Garth Nix in Shade’s Children. Gemma Malley does not, however: her society is an uninspired totalitarian society, one that though it is spoken of aplenty in The Killables is never truly inspected or delved into. There are few (if any) key features that make it stand out against the aforementioned; it simply feels like a framework upon which then to hang the originality and inspiration.

More important than anything to a good reading experience is that the reader has a good relationship with the book- that they connect with it, that the have some sort of feeling for the characters (whether that be positive or negative is irrelevant- both are equally powerful and potent) and that the prose is something that the reader’s personal brain can access and process easily. Sadly, The Killables offered none of these things for me: I felt distant from the novel, the characters felt somehow as if they were underperforming and Malley’s prose got to my head more than once. It must be remembered, though, that these are very subjective and vary greatly from person to person.

For a novel to reach excellence, I have one criteria: it must give me the buzz factor. And the buzz factor is hard to pin down and divide into its component parts but one thing is for sure: I know (and you probably do to) when you get the buzz factor. Sadly, The Killables just didn’t get me to that point. I was emotionally disengaged from both the characters’ plights and the novel as a whole, and I felt more of an obligation to finish it than an honour.

For every Hunger Games or Divergent there is always another, weaker counterpart. Right now, the YA market is bloated with them, and I can only see The Killables going the same way. Gemmy Mallable may be a great author, but The Killables is not her moment- it lacks the charm of its greater counterparts, though if you’re looking for a standard dystopian and can’t get enough of dystopia right now, this might be for you.

More in the Killables Trilogy: