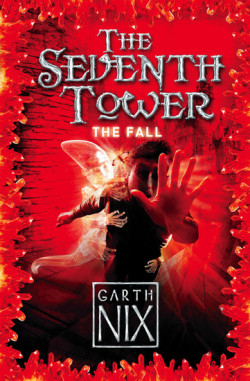 Published: 2000, June by Harper Collins
Genre: high fantasy Age: 10+
Synopsis: First of a thrilling fantasy adventure series set on the Dark World, where society is ranked according to its colour clan and the most precious commodity is light. In all the world there is only one place that ever sees the sun. A seven-towered castle built upon a mountain high above the desolate ice lands below. Tal is getting ready for the Day of Ascension -- a day when all the 13-year-old Chosen from the Castle of Seven Towers enter the spirit world of Aenir. Then his father disappears with the family's Primary Sunstone. Without it, Tal cannot enter Aenir and bind himself to a Spiritshadow -- a guardian being, both protector and friend. Tal tries to steal a Sunstone, but during his act of thievery is thrown off the Castle of Seven Towers by a powerful Spiritshadow Keeper. He falls down to the iceworld below, where he is captured by Icecarls. To save his life, he must team up with Milla -- a Shield-Maiden-in-training -- and offer his aid to the nomads. Which complicates his task immeasurably!

Tal needs a Primary Sunstone, otherwise he cannot capture a proper Spiritshadow. His Father is missing, presumed dead, with the Family’s only Primary Sunstone, and Tal has tried everywhere to obtain one, each attempt failing more miserably than the previous.

When I started reading this, I thought it was a good book. On reviewing it, however, it seems not to be as good as I hoped. Lets start with slightly odd structure. As you saw above, it begins with the main protagonist Tal climbing up a red tower trying to get a ‘sunstone’. After this chapter, it switches immediatly back to before the event even took place, explaining why Tal needed a ‘sunstone’. This is slightly confusing, and the only reason I can think of is that Garth Nix wanted to place some action in the opening to grab the reader. After eleven chapters of ‘before’, we then see ourselves plunged into events after the climbing of the tower. All this jumbling completley destroys any flow the story had.

Another discovery I made whilst reading ‘before’ is that the concept of the book is very similar toWilliam Nicholson’s The Wind on Fire. This intrigued me, so I checked the publication dates, and they both seem to be published in the same year. So either the authors are both psychic or they just happened to stumble on the same idea…

The characters, I found were quite average, lacking some development. Some of the most intriguing characters I found were the minor ones, icluding Ebbitt, Tal’s  great uncle. May we see more of him in the sequel.

In the ‘after’, I lost the story. It was bland to begin with, featuring Tal walking in the dark for a couple of pages. The subsequent episode (which I won’t reveal…) I felt needed more oomf.

Now your probably asking what is actually positive about the book. I might say that the concept of the ‘sunstones’ is very much too my liking, as is are the ‘Shadow guards/spirits’.

All in all, I was mildly disappointed by The Fall. After reading some of Garth Nix’s other works, I did feel slightly let down. seeing as the book is only 208 pages long,  there could have been a lot more character building and detail in some areas.

More in the The Seventh Tower: