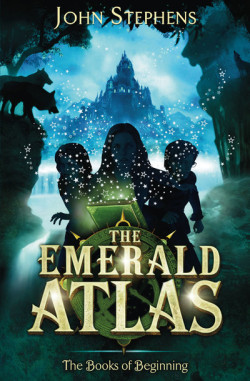 Published: 2011, April by Random House
Genre: fantasy Age: 9+
Synopsis: The first thrilling book in the most exciting children's fantasy series since Harry Potter. They were taken from their beds one frozen night, when the world was covered in snow. The silhouette of a tall, thin man has haunted Kate ever since. Ten years on, Kate, Michael and Emma have grown up in a string of miserable orphanages, and all memories of their parents have faded to a blur. Arriving at Cambridge Falls, the children quickly realise there is something different about this place – and Kate feels sure she has seen the dark, crooked house before. As they explore, they discover an old, empty leather book. The moment they touch it, an ancient magical prophecy is set irrevocably in motion, and the children are thrown into a dangerous alternate reality of dark enchantments and terrifying monsters. Only they can prevent the terrible event that will ruin Cambridge Falls – and stop the world from falling into complete devastation.
Watch the book trailer

Given up by their parents, Kate, Michael, and Emma move from orphanage to orphanage, sometimes staying no longer than two weeks. The reason? All three believe their parents will re-claim them one day. For now though, they’re moving to a new orphanage, one set in the mysterious Cambridge Falls. The only children in their new orphanage are the three, and it soon becomes clear why a certain Dr Pym took them in – not least when they discover a lage, empty green book in a forgotten room that takes them to different times…

Fantasy books for primary schoolers are few and far between; most novels aimed at the 8-12 market are relatively slim novels with real world settings. Historical fiction as well as diary-style girls series are popular – fantasy not so much.

The Emerald Atlas seems to want to change that. It’s clearly written for pre-teens. Everything from the characters to the prose to the story itself is a lot simpler than much of the YA fantasy out there. For anyone above the age of 13 – 15 looking for grand fantasies, I don’t suggest The Emerald Atlas. But for what it is, The Emerald Atlas is a good attempt at bringing the high fantasy story to a younger audience.

What bugged me most about The Emerald Atlas and really makes it obvious that this is a children’s novel is the dialogue (and to a lesser extent, the characters). The dialogue, as in far too many fantasy novels, is often quite stale and factual. Little of the characters’ personalities are demonstrated through dialogue; as we all know, showing is a lot better than telling. A few of the minor characters, are also less three dimensional than they could have been, and for some of them they have been typecast (and I should mention here that many derivative, YA/adult fantasies also have type casts, and I understand that in some cases it is necessary) in the literary sense. The Countess, who in this case is the primary villain, is only evil for the sake of being evil, and as character development goes, she seems pretty flat. However- it should be noted that this IS a children’s book, and serving them something with complex villains would not be relevant for the target audience, so I was quite happy to read The Emerald Atlas. The Three main characters, are solid; and the way they are all affected slightly differently by the happenings in the novel really eccentuate that and make them unique.

The Emerald Atlas has a vague sense of familiarity about it, and on various occasions I made comparisons to Harry Potter and more so The Hobbit/Lord of the Rings. Most if not all of the familiarities are small- minor action points or details- and it’s never quite clear if this is a coincidence or just John Stephens subconsciously being inspired by some of his favourite novels. Either way, the familiarities can be forgotten when they are compared with core concept of the novel with which I was thoroughly impressed by; the time travel worked remarkably well with the story, and it felt both fresh and fun. The complexity of the time travel is just right so as not to confuse younger readers but still being realistic and enjoyable.

Considering this novel is aimed at pre-teens, The Emerald Atlas, understandably, is not on the same level as other YA fantasies, and coming to this fine novel I was prepared for this. The main characters are all different, and all three of the children develop unique personalities and traits as the novel progresses. For a novel aimed several years my junior, I really enjoyed The Emerald Atlas. The concept was what sold it, and Stephens’ take on time travel in a fantasy setting is not one I have seen before. The Emerald Atlas will be a light read for anyone used to the epics such as Lord of the Rings or the Belgariad, but it will introduce younger readers to the fantasy genre and hopefully entice them to read more and progress as they get older. I thoroughly look forward to the next two novels in this trilogy.

What did you think about The Emerald Atlas?

More in the Books of Beginning: