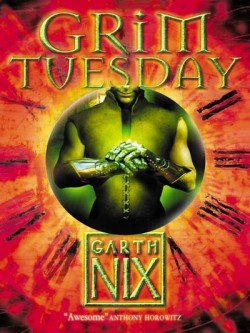 Published: 2004, June by Harper Collins
Genre: high fantasy Age: 12+
Synopsis: Second title in Garth Nix's gripping new fantasy adventure series. Arthur Penhaligon didn't think he would ever have to return to the strange house that nearly killed him on Monday -- the house that contains a fantastical and sinister realm inside. But the next day brings new challenges -- in the form of an enemy named Grim Tuesday, who threatens the safety of both Arthur's family and his world. Arthur must retrieve the Second Key from Grim Tuesday in order to save everything -- an adventure that will force him to steal a Sunship, survive a very weird work camp, befriend a bearlike spirit and fight the void Nithlings. Even after all that, he will still have to venture into the scary Far Reaches for an ultimate showdown.

After the successful but stressful events that happened on Monday, Arthur really didn’t want to be called back to the House the very next day! But there’s not a lot he can do.The Grim, that is Grim Tuesday, has found a loophole in the agreement, and not returning to the ‘House’ would mean forfeiting his family and their possessions…

Grim Tuesday is the second book in the seven part series, The Keys to the Kingdom. Returning to where Mr Monday left off, it continues to explore the surrealist world that was introduced in book one.

Grim Tuesday starts with an interesting prologue that manages to re-introduce the main characters and explain the doings of Tuesday at the same time. The prologue is really easy to get into, and Garth Nix’s rather more descriptive writing gives it a realism that really benefits the book. It also manages to summarise and remind us of the happenings in Mr Monday in a non-intrusive way – great for people like myself who read Mr Monday a while ago.

If you’re one if those people who love to read about character developments, this book really isn’t for you. Garth Nix’s biggest shortcoming in Mr Monday and Grim Thursday is the main character, Arthur. I don’t think I have read any book recently with a main character that is as bland and un-inspired as Arthur. When I finished Mr Monday, I was hoping for some character developments to occur in Grim Tuesday. Apparently not, as Arthur is still as dull and unrealistic as he was in our first adventure with him. The speech, too, is also not quite up to standards. While most of the time it is adequate, it becomes unrealistic more than once, particularly in Arthur’s case.

Garth Nix’s imagination does lessen the pain, though; the world-building is spectacular. The Keys to the Kingdom introduce us to a fantastic concept, and this is what drives Grim Tuesday. The surreal, fantasy world of the ‘House’ reminds me of Dali’s paintings, particularly with the Victorian-esque feel that permeates throughout the backstory and the ‘House’. Undoubtably, this is Nix’s strongest ability, and it really works wonders. The whole fantasy aspect of the book -the ‘House’, the ‘Architect’, the ‘Keys’- are fabulously imagined, and couldn’t be more vivid.

Although it’s been a long time since I’ve read Mr Monday, I distinctly remember it being a more dark and grittier book. Grim Tuesday, in comparison, seems much more up-beat, and I felt that as a whole, the characters managed to do what they wanted a little to easily; I never doubted the fact that Arthur would manage to succeed in inheriting the second key. This may be due to the recipe effect the series has- knowing that Arthur must be successful, or the next book wouldn’t be titled with the next day, but I’m sure a little more mystique and despair wouldn’t go amiss…

Grim Tuesday is a very hard book to give a distinct rating. While it really excels in terms of world-building and imagination, it lacks quite significantly in the character department, something that is extremely important to a book. Read Grim Tuesday for the ideas and concepts it conveys, and for the imagination and hard work Garth Nix put into creating this fantastic parallel universe, and not for the characters.

More in the The Keys to the Kingdom: