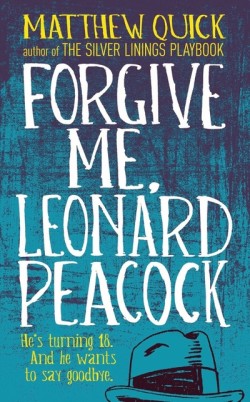 Published: 2013, August by Headline
Genre: bildungsroman Age: 15+
Synopsis: How would you spend your birthday if you knew it would be your last? Eighteen-year-old Leonard Peacock knows exactly what he'll do. He'll say goodbye. Not to his mum - who he calls Linda because it annoys her - who's moved out and left him to fend for himself. Nor to his former best friend, whose torments have driven him to consider committing the unthinkable. But to his four friends: a Humphrey-Bogart-obsessed neighbour, a teenage violin virtuoso, a pastor's daughter and a teacher. Most of the time, Leonard believes he's weird and sad but these friends have made him think that maybe he's not. He wants to thank them, and say goodbye.

The title – Forgive Me, Leonard Peacock, is very evocative – forgive whom? For what? – and it certainly gives a good sense of what’s instore. But it never really gets explained. I like it that way: I like the slightly ambiguous ending, the way it doesn’t really cast judgement on our protagonist Leonard, that it’s a story, in many ways, that can mould itself to the reader’s judgement.

Leonard, as you might expect, is an extremely disenfranchised seventeen year old. He’s angry – very angry – for things we don’t really get to see and he is quite self-conscious of his anger and his mental instability, too. There’s  a sense that he knows he’s going off the rails a little, but can’t help himself, can’t prevent the momentum that is pulling him deeper and deeper, and I suspect this is something that people like him will be able to relate too. He’s also deeply fragmented from society, both inferior and superior to his class mates, from whom in many ways he seeks validation but also spurns.

If you thought Forgive Me, Leonard Peacock was going to be a John Green-style emotional rollercoaster, you’d be wrong. Matthew Quick is very careful not to sensationalise and/or glamourise Leonard’s ordeals, and thus Leonard’s own narrative is cold and emotionless. Equally, some readers will be frustrated with the ambiguity with Leonard’s ‘trigger’, though I personally found that it usefully provided a distance to what can only have been some horrific encounters. In many ways, too, it’s not about what happened: it’s about where Leonard is now, and to go into specifics would be too much, I think, for the narrative as well as the reader.

There’s not much that can be said about Forgive me, Leonard Peacock; it is what it is. Some will want to read it, and I hope that if you are one of those people, it will help you a lot. For some of us, it will be less relevant but still, I think, a book worth reading and one that will help you understand. In any case, Quick is careful not to overdo elements and toes a fine line between sensationalism and underdevelopment.