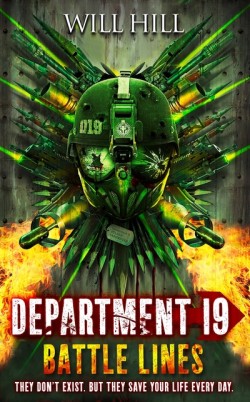 Published: 2013, March by Harper Collins
Genre: horror, supernatural Age: 13+
Synopsis: Book 3 from the talent behind the bestselling hardback YA debut of 2011. Dracula is on the verge of coming into his full power. Department 19 is on the back foot. Ladies and gentlemen: welcome to war. The stakes? Mankind’s very survival…As the clock ticks remorselessly towards Zero Hour and the return of Dracula, the devastated remnants of Department 19 try to hold back the rising darkness.Jamie Carpenter is training new recruits, trying to prepare them for a fight that appears increasingly futile. Kate Randall is pouring her grief into trying to plug the Department's final leaks, as Matt Browning races against time to find a cure for vampirism. And on the other side of the world, Larissa Kinley has found a place she feels at home, yet where she makes a startling discovery.Uneasy truces are struck, new dangers emerge on all sides, and relationships are pushed to breaking point. And in the midst of it all, Department 19 faces a new and potentially deadly threat, born out of one of the darkest moments of its own long and bloody history.Zero Hour is coming. And the Battle Lines have been drawn.

The clock ticks on and still, Dracula is at large, regaining his power, biding his time before he unleashes a massacre unlike any seen before…

For a novel titled “Battle Lines”, this sequel to both Department 19 and Department 19: The Rising contains significantly fewer battle sequences and a significantly smaller–scale climax than that which we saw on Lindisfarne and Frankenstein’s emancipation from the hands of Alexandru than its predecessors as Hill ratchets up the pressure for the next novel, primarily through the introduction of several discoveries that will change the way the Operators of Department 19 will be able to combat supernatural activity. In some ways, this makes it a less driven novel than The Rising, which had far more straight action, and is consequently a read that might not be as engrossing.

In line with Hill’s previous novels, Battle Lines begins with plenty of exposition, and the narrative jumps from character to character as well as around several time periods. Several new characters are introduced, including descendant Albert Harker and the fathers of Kate Randall and Matt Browning. Their narratives aren’t uninteresting as such, but by mere consequence that they take us away from Jamie, Larissa and Kate, they become less  absorbing and almost a distraction, though necessary. We find out the reason Hill has included these around two thirds in, when all the strands of the plot converge and some real conflict and tension is introduced. It’s at this point that Battle Lines gets cracking and powers on until the very last sentence.

One of the themes that is introduced in Battle Lines is the morality of killing all vampires, rather than just the violent ones that pose a threat to the human population. I was disappointed by the lack of exploration of this theme – it’s one that could create some interesting dilemmas, I think – though I suspect it will receive significant development in the next novel.

Hill introduces some interesting tensions through the characters of Jamie and Larissa in Battle Lines, who are geographically split, as Larissa takes on a short transfer to NS9, the North American department for dealing with the supernatural. Unlike in Department 19, where her vampiric status is largely a threat to the other operators, at NS9 she is welcomed with open arms and her supernatural abilities revered.

Battle Lines isn’t my favourite Department 19 novel – The Rising retains that title – but it’s still a worthwhile and enjoyable read that takes us, more than anything, on a political journey throughout the supernatural departments of the world.  Expect the action to return, though, as Hill has unleashed some terrible revelations that I don’t doubt will come to haunt Jamie, Kate, Larissa and Matt as they try and deal with the explosion of hyper-powerful vampires and Dracula’s inevitable rise.

What did you think about Department 19: Battle Lines?