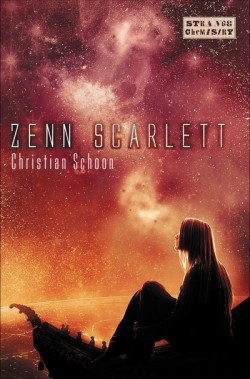 Published: 2013, May by Strange Chemistry
Genre: mystery, sci-fi Age: 12+
Synopsis: Zenn Scarlett is a bright, determined, occasionally a-little-too-smart-for-her-own-good 17-year-old girl training hard to become an exoveterinarian. That means she’s specializing in the treatment of exotic alien life forms, mostly large and generally dangerous. Her novice year of training at the Ciscan Cloister Exovet Clinic on Mars will find her working with alien patients from whalehounds the size of a hay barn to a baby Kiran Sunkiller, a colossal floating creature that will grow up to carry a whole sky-city on its back. But after a series of inexplicable animal escapes from the school and other near-disasters, the Cloister is in real danger of being shut down by a group of alien-hating officials. If that happens, Zenn knows only too well the grim fate awaiting the creatures she loves. Now, she must unravel the baffling events plaguing her school, before someone is hurt or killed, before everything she cares about is ripped away from her and her family forever. To solve this mystery – and live to tell about it – Zenn will have to put her new exovet skills to work in ways she never imagined, and in the process learn just how powerful compassion and empathy can be.

On the dusty surface of Mars, Zenn has always known that she wanted to follow in her parents’ footsteps and become an exovet, caring for exotic and interplanetary life-forms. But unlike her parents, she is able to foster a unique connection with the creatures she treats – and just for a moment, share their consciousness…but is this real or does she just belong in a lunatic asylum and labelled “damaged goods” in light of her mother’s untimely death deep in the body of a gigantic, interstellar Indra?

All well and good, you may think – it sounds like a cracking little story that seems like a cross between James Cameron’s Avatar and Disney’s Treasure Planet. And yet, Zenn Scarlett never seems to get going, never seems to move beyond a passing interest to offer a cracking unputdownable sci-fi adventure. The question I was asking myself throughout was, “why isn’t this better? Why am I not feeling the narrative?” – the answer, I hope, you’ll find in this review.

Fundamentally, I think, the problem lies in its complete lack of a plot. The book begins at quite a leisurely pace, chronicling Zenn’s daily routine as an exovet in training, treating all sorts of fascinating and wonderful creatures – all well and good, and it’s at this point that Schoon’s imagination comes is shown off – quite rightly – as he describes alien Animalia in Avatar-like detail. Problematically, though, Zenn Scarlett never moves beyond its beginnings: when you expect it to pick up and move away from the rather limiting environment of the Cloister (there are only 3 other residents) and whip Zenn away from her comfort zone, it fails. Instead, she potters along, seemingly ruining the life of every alien animal she encounters and showing us her academic prowess in the ever-so-slightly info-dumpy descriptions of her poor, long-suffering patients. And that’s it. There’s a slight conflict when the Cloister is threatened with eviction – but apart from that, tension runs pretty low and certainly not enough to give a sense of the raison d’etre of the novel. With all due respect, the story becomes a tedious sci-fi version of Willard Price’s Animal Adventures: which though endearing, are the writings of a different era of storytelling.

I’d be able to forgive Schoon the non-existent plot if Zenn Scarlett were filled with wonderful, vibrant characters. Sadly, it isn’t. Zenn has potential, but it’s never really realised. Instead, she has a floundering romantic interest in Liam Tucker, the mysterious townie who shows a sudden interest in helping out, but even this isn’t as emotionally engaging as it should be, my heart rate remaining slow and steady even during key romantic scenes. In fact, I never really got a grip on who Zenn Scarlett actually was; I could never imagine her response to situations. The other characters are equally two dimensional, and even the dialogue sounds stilted – informational rather than conversational, which is what it needed to be to give the characters a kick of life. Only Hamish, with his idiosyncratic phrases, stood out as anything more than a talking info-dumper, offering the odd chuckle.

Zenn Scarlett begins with the promise of an alien whodunit mystery set in the dusty terraformed troughs of Mar’s pockmarked surface. It ends, quite disappointingly, having taken one step forward and two steps back; it’s only attraction the Avatar-like creatures Schoon describes quickly becoming as dull as reading a zoology text book, as his story potters along and tries to justify its existence with creature description after creature description. Sadly, imagination on its own doesn’t cut it without a decent set of characters. If you’re in search of a decent, new sci-fi, you’d be better off with Garth Nix’s A Confusion of Princes.

More in the Zenn Scarlett: