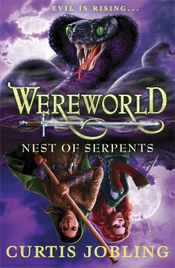 Published: 2012, June by Puffin Books
Genre: high fantasy Age: 12+
Synopsis: WAR HAS GRIPPED THE SEVEN REALMS . . . Young Werewolf Drew Ferran, rightful king of Westland, has rushed to the aid of the besieged Staglords, whose mountain stronghold is surrounded by the forces of the Werelion Prince Lucas. And deep in the haunted Dyrewood forest, the Wereladies Gretchen and Whitley seek sanctuary within the city of Brackenholme. No opposing force has ever breached the palisade walls, but danger could be closer than they think... As Lyssia's greatest war rumbles towards a thunderous climax, the lines between friend and foe are blurred. What if the enemy is one of their own?

Lyssia and the Seven Realms are far from peacetime: across shores, plains, woods and mountains, the Lion is mounting an army capable of crushing every one of the resisting Wolf’s Council to create an ultimate dominion. But hope has not been lost: though they do not know the whereabous of the Wolf, they are confident in him, and will go to the very ends of the earth to protect those they hold dearest.

‘Evil is rising’ is the tagline of of the third sequel to Rise of the Wolf but a far more appropriate phrase would be ‘Evil is still rising’ as Jobling pushes the Wolf’s Council’s even further to desperation in Nest of Serpents as they are seemingly overrun from all sides by allies of the Lion. Jobling plays the game masterfully, leaving just enough hope not to discourage us from reading it without giving us too much confidence in the rebellion of Drew and his allies.

More characters are introduced in Nest of Serpents, adding to the already grand pantheon of leads in the series, but Jobling is able to juggle them proficiently and distinguish between them all sufficiently that the novel doesn’t become confusing or difficult to understand. Most interesting is the introduction of Drew’s brother, whose point of view I hope will be expanded upon in future novels as his character grows and becomes an important part of the resistance.

The Wereworld series may not have some of the best writing in high-fantasy literature, or the most original worlds, but Jobling does more than enough to keep me entertained and reading on: it is the characters and their desperation that makes me root for them and despair when another hope is lost. Jobling plays his readers perfectly and I look forward to the next installment in this lengthy series- though he’ll have to be careful that the series some development and progression.