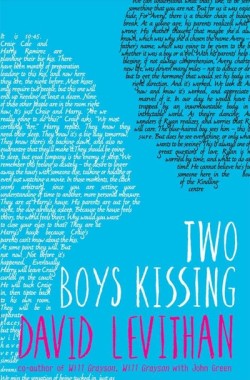 Published: 2014, March by Electric Monkey
Genre: bildungsroman, LGBT Age: 12+
Synopsis: From the New York Times best-selling author of Every Day, another thoughtful and original perspective on the things we do for love. The two boys kissing are Craig and Harry. They're hoping to set the world record for the longest kiss. They're not a couple, but they used to be. Peter and Neil are a couple. Their kisses are different. Avery and Ryan have only just met and are trying to figure out what happens next. Cooper is alone. He's not sure how he feels. As the marathon progresses, these boys, their friends and families evaluate the changing nature of feelings, behaviour and this crazy thing called love.

It’s taken almost a year but David Levithan’s acclaimed and (not very) controversial Two Boys Kissing has finally landed in the UK, thanks to Egmont’s Electric Monkey imprint (who, as it happens, have recently published some cracking stuff). For some reason, Levithan just isn’t as widely read as in the States, or more to the point, hasn’t been in the past as lots of his stuff is now being picked up by UK pubbers – perhaps largely down to the fact that the UK market treats LGBT fiction and characters as a sort of non-issue (prior to Two Boys Kissing I read Non Pratt’s Trouble, which has a gay character who is completely and utterly non-sensationalised and treated as any other character) – though it’s still nice to be able to diversify the sub-genre over here with some big name authors.

Two Boys Kissing, as you might guess, is about two boys kissing; but it’s also about a swathe more of characters as Levithan presents a tableau of stories ranging from a happy couple (not the two boys kissing, you might be surprised to hear) to an unsatisfied and lost boy, Cooper, who trawls the internet looking to pick people up because that’s the only social interaction he knows. Notably, it’s narrated by an anonymous chorus of gay men who died of HIV in the eighties and early nineties, and their celebration of life and improved gay rights permeates the novel.

“We didn’t have many role models of our own–we latched on to the foolish love of Oscar Wilde and the well-versed longing of Walt Whitman because nobody else was there to show us an untortured path. We were going to be your role models. We were going to give you art and music and confidence and shelter and a much better world. Those who survived lived to do this. But we haven’t been there for you. We’ve been here. Watching as you become the role models.”

As usual, Levithan manages to capture what it means to be gay perfectly, highlighting a whole range of familial and social situations. If you’re out, closeted, in a relationship – there’ll be a character you can relate to, someone’s struggles who are (or were once) your own. There’s also a great deal of moralising going on, which isn’t always subtle and where I sometimes wondered if it wasn’t better to just paint characters as they are – without providing a commentary on how wrong their views are. Perhaps, though, that’s just me speaking as a Brit in a nation which is largely supportive of gay relationships, and perhaps that style is necessary in the States, where there is still a huge furore regarding gay rights.

Two Boys Kissing is probably Levithan’s most-acclaimed and popular novel to date, and it’s not hard to see why: beautifully written, this portrayal of life as a gay teenager is more powerful and has more to say than some of his previous romantic novels a la Boy Meets Boy.

What did you think about Two Boys Kissing?