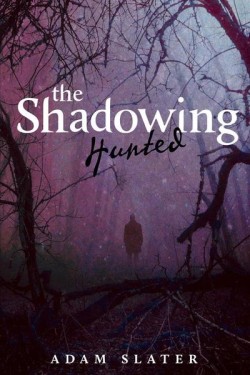 Published: 2011, May by Egmont
Genre: horror Age: 13+
Synopsis: The girl lies by the canal, her face turned upwards like a stargazer. But she will never see the stars again. Her eyes have been torn out. The rain fills the empty sockets until they brim over, spilling bloody tears down her cold, white cheeks. Once every century, the boundary between the demon Netherworld and the human world weakens. Legions of creatures gather, preparing to cross over, to bring death and destruction. This time is called The Shadowing. Callum has always known that there is something beyond the mortal world - he can see ghosts. Lately, he's started to have horrific visions of children murdered by some terrible, unseen creature. And then the visions start to come true - and Callum realises he is being hunted too. But Callum must stay alive. He is bound by a dark destiny, and must stand against the demon forces that threaten our world forever. For it is nearly time. The Shadowing is coming...

Hunted, written by Adam Slater and published early May is the first in his new horror series, titled The Shadowing. This book follows the path of Callum, a supposedly normal boy (the “normal” you come to guess that isn’t that normal) who seems to have extraordinary luck…what the devil could this lead to? Ironically, it could actually be the devil. He starts to become aware of some presence following him one night, in a dark wood on his way back home (original, I know). It turns out he’s being hunted by something that’s not from this world.

The underlying thought I had the second I read the blurb is that it was a all but the same idea of Horowitz’s Power of 5 series, based on evil creatures opening a “gate” to get into our world, and children stopping them. Basically this is the plot line to Hunted too, sadly, so originality in the plot line is considerably weakened if you’re a fantasy fan. The ideas of course were different, as this was clearly based more on the genre of horror; the descriptions of the monster are still very clear in my mind, due to at one point I was actually slightly scared. However, one point in the whole three hundred pages in a horror book I guess is not that that impressive.

It was clear from the text that the writer had a clear aim, but he didn’t leave enough hints for you to tot up yourself; it was all very easy to follow and the normal guessing games weren’t needed to be deployed by your brain. The main character, Callum, has no unusual characteristics in himself, which left the book plain and unexciting in character sense. However, the next biggest teenage character, Melissa, is really interesting. Unoriginally, she knows the answers to all of his supernatural questions, but she does make the story more interesting; she doesn’t fit the normal stereotype of scared girl that freezes at the first sign of trouble. In contrast, Callum’s one remaining family member, his gran, is as normal as caring-grans-that-keep-a-secret-just-to-make-the-story come. Spoiling the story isn’t what I plan to do, but the more fascinating characters are revealed half way through the book, two, to be exact…

Alternatively, the one thing I found strange was how the author managed to get through three hundred pages with only four different places that form scenes. The sheltered life Callum lives could be the reason for such a modern seclusion, yet this made it less believable to me. It implied that Callum wasn’t an ordinary boy from the start, which let away the “secret” (if you can have this kind of secret in an inevitable plot) and lost the shock. If the author was to illustrate Callum in a more accepted, nevertheless unoriginal light, it may have been easier to empathise with him.

In a nutshell, this book doesn’t appear to be a world-beater or anything unusual of this era. I have not read many horror series so it would be unfair for me to judge it against the likes of Shan (although quotes say it stands up to his). Nonetheless, it’s an interesting book with view to many sequels. If I manage to get hold of the second in the series I will not begrudge reading it, however I wouldn’t purposely head out to get it. That said, and as I will continue to say, everyone takes books differently, so I would recommend having a little look if you come across it.

Simple, yet effective in its aims and clear plot line, this horror novel is quick and sharply into the action; you’re not likely to get bored.

This review was written by Michael.

More in the Shadowing: