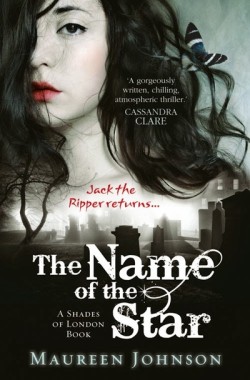 Published: 2011, September by Harper Collins
Genre: bildungsroman, ghost, supernatural Age: 13+
Synopsis: The day Louisiana teenager Rory Deveaux arrives in London marks a memorable occasion. For Rory, it's the start of a new life at a London boarding school. But for many, this will be remembered as the day a series of brutal murders broke out across the city, gruesome crimes mimicking the horrific Jack the Ripper events of more than a century ago. Soon Rippermania" takes hold of modern-day London, and the police are left with few leads and no witnesses. Except one. Rory spotted the man police believe to be the prime suspect. But she is the only one who saw him. Even her roommate, who was walking with her at the time, didn't notice the mysterious man. So why can only Rory see him? And more urgently, why has Rory become his next target? In this edge-of-your-seat thriller, full of suspense, humor, and romance, Rory will learn the truth about the secret ghost police of London and discover her own shocking abilities.
Watch the book trailer

When her parents are offered jobs in Bristol, England, Rory decides she wants to spend the year in a London boarding school, far away from her Louisana home across the pond. Unknowingly, her arrival is timed perfectly with the beginning of a series of brutal murders across the East End, and Rory is the only one to have seen the prime suspect. They might not even be human…

I was a bit late to the party when I finally got around to reading Maureen Johnson’s The Name of the Star but late is better than never, they say, and the saying isn’t often more true than it has been in the twenty-four hours it has taken me to read Johnson’s latest offering.

I am a staunch believer in books that give accurate first impressions. The whole, “don’t judge a book by its cover” is a lie: the cover and title of a book, must give a good representation of what is written on the pages inside. Covers and titles are snapshots- little previews that allow you to make a decision on whether a novel is worth reading or not. Sure, there are plenty of books that go above and beyond what their covers claim to do, and there are yet others that fail miserably short or are actually completely different to what is promised. The Name of the Star leaves me unconvinced- not of the novel, but of the fact that the publishers are alienating an entire share of the young adult market by slapping the novel in such a female-orientated jacket: an illustrious gothic girl looking windswept, a title that suggests that the novel is more in line with Jane Austen than ghost-busters, a hastily placed “Jack the Ripper returns” tag line that makes it seem like the romance is as twisted as in Wuthering Heights. The Name of the Star isn’t gothic, it isn’t sexy. It isn’t hopelessly romantic. The setting is modern day London: the story is terrifying. Sure, the protagonist is female, but that in itself shouldn’t stop any guy from reading the novel. What will stop any guy picking up the novel from a stand is the jacket, though, gorgeous as it is. (And maybe the title.)

Boarding school stories are always great, and The Name of the Star is no exception. Nothing is more fun than when you remove parents from the equation and let teenagers do their thing. There are grudges, escapades, a little romance (and when I say little, I do mean little: Johnson does a great job of keeping it under control and not letting it take over the novel. It’s rather endearing and more than a helluva realistic) and, of course, uniform. In fact, it really did make me chuckle at how easily Johnson made me fall in love with- get this- my own country. Johnson, as a frequenter of London and England, knows what she’s talking about and there are enough references to British pop-culture to make it clear she’s pretty clued up and not just researching Britain from 2000 miles away- and her American perspective on things really made me chuckle at points.

My chuckling stopped when things got spooky, and they did; pretty quickly. There are moments half way through The Name of the Star when the novel is terrifying and I had to go through some YouTube therapy before I could switch of my light and try to sleep. Johnson does not shy away from gore, terror or fright, and that’s kinda scary.

Johnson’s characters are excellent. So excellent and grounded in reality that they’re hard to think of as fictional entities. All of them- from housemistress Call Me Claudia to timid Jazza- are recognisable as real people. Rory herself is a perfect mixture of normality and American exuberance, a typical teenager worrying over school work and boys and those creepy people that she seems to be able to see but nobody else can. There isn’t any sensationalism about her that makes her seem unrealistic. She’s pure, bog-standard normality faced with a problem of how to reconcile er clearly abnormal tendencies and every-day school life.

The Name of the Star is told in first person, but it’s told in such an unobtrusive manner that you could be forgiven to think that the whole novel is told in third person. Johnson’s prose is smooth and distinguished, the lapses into third person barely noticeable and yet suitably informative without getting in the way. I spent hours immersed in the novel, unaware of the words as they entered my mind and immediately brought the scene to me. This is how reading is supposed to me: subconscious.

The Name of the Star isn’t the only ghost-busting novel out there, but it’s certainly the best. It’s sophisticated, real, and both terrifying and exciting. You may not be into ghosts right now, but once you’ve finished this novel, you will be. At least, you’ll be desperate for the second, third and possibly subsequent novels. Read this in a day.

What did you think about The Name of the Star?

More in the Shades of London: