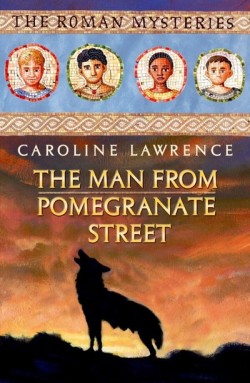 Published: 2009, June by Orion
Genre: detective, historical Age: 9+
Synopsis: September AD 81. Returning from Ephesus to Rome, Flavia and her friends learn of the mysterious and sudden death of the Emperor Titus. Was his death natural? Or was it murder? As the four detectives investigate this mystery, they little dream how much their lives - as well as the future of Italia - will be changed as a result. At last, many of the questions Roman Mysteries fans have been burning to have answered are revealed in the final book of the series.

The Man From Pomegranate Street is the last installment of the 17 part series, the Roman Mysteries. It follows Flavia, Nubia, Jonathan and Lupus, as they try to clear their names from crimes they did not commit. However, they soon discover that the Emperor Titus is dead, and Flavia believes that Domitius, his brother, is to be blamed. But not all goes as is planned…

I was very excited when The Man From Pomegranate Street came out; I had already read the 16 predecessors. However, I do not think this was the best in the series. Don’t go and think that you won’t bother reading it- it is still a good book, but I felt some parts were a bit rushed, and Caroline Lawrence needed some time to develop the ideas more. Without spoiling it for you, I’ll try and point them out.

Let’s start with the Nubia-Aristo relationship. Even if you haven’t read this particular book, it would have been very obvious that this was going to happen at some point. I felt that the relationship was very underdeveloped. The way that they turn from secret lovers to a couple is very fast, and quite unnatural, seeing as Aristo goes ‘I love you’ while trying to protect Nubia. The narative then switches soon after, and when it returns to Nubia and Aristo, we see them as a couple.

The second item that I felt was a bit confusing, was the vast number of plot changes. There were so many, especially in the last 100 pages, that it got all together more confusing.

Don’t get me wrong; the book is still a good book, especially if you are a fan of the series, as it has so many answers to all the things we’ve been waiting for. Even Tranquillus turns up, as does Flaccus, and there is a slight rivalry for Flavia….But I won’t spoil that for you! The Man From Pomegranate Street just felt quite rushed, I don’t feel it’s the end the Roman Mysteries deserve.

More in the The Roman Mysteries: