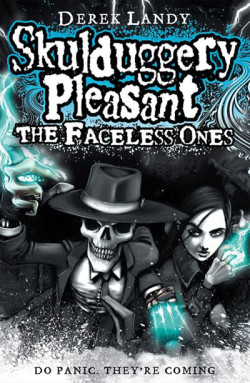 Published: by
Genre: action, fantasy Age:
Synopsis: Third bone-breaking, belly-busting adventure in the series that puts the “funny” back in… um… funny series. That didn’t really work, did it? If you’ve read the previous Skulduggery books then you know what the Faceless Ones are – and if you know what the Faceless Ones are, then you can probably take a wild guess that things in this book are going to get AWFULLY sticky for our skeletal hero and his young sidekick. If you haven’t read the previous Skulduggery books then what are you doing reading this? Go and read them right now, so that you know what all that stuff in the previous paragraph was about. Done? Good. So now you’re on tenterhooks too, desperately awaiting the answers to all your questions, and instead you’re going to have to wait to read the book. Sorry about that.

The Faceless Ones are returning, and this time it’s for real. Batu, the archvillain, has taken all the necessary precautions to ensure that Skulduggery Pleasant and the cheap little sidekick of a girl of his cannot interfere with his grand scheme. This time, the Faceless Ones really will return, for real. It’s all-go for Skulduggery and his team, as they prepare to battle the whole essence of evil.

While I was disappointed with Skulduggery Pleasant: Playing with Fire, the third book in the skeleton-detective series, The Faceless Ones, has taken the series in a whole new direction, a direction that has drastically improved my opinion of the books.

It’s the third time that someone has tried to unleash the power of the Faceless Ones in the series, in just as many books, but The Faceless Ones manages to bring that repetition to an end and drive the story forward. The plot itself is fantastic- while the previous book was non-stop action, The Faceless Ones has toned that down, and it is far easier to read and enjoy. Not only that, but consequences are now also beginning to happen for the actions of Valkyrie and Skulduggery, making it far more realistic. In fact, numerous characters seem to die (I use seem, as you can never tell if they are truly dead; particularly if the star of the series is a talking Skeleton…) As far as plots go for teen and preteen novels, The Faceless Ones manages to do it quite well; building the tension in a fantastic way and really notching up the story to a new level, that I haven’t seen in Skulduggery Pleasant before.

In previous books, I always felt that Valkyrie, while the books were supposed to be centred around her, always took the second position when it came to development of characters. With this third instalment, this problem seems to have been extinguished, and I have really come to like Valkyrie in The Faceless Ones. Derek Landy has managed to define her fully now, and while I always felt that Skulduggery was always the main character, as it were, that invisible line seems to be disappearing, and Valkyrie manages to become more than just a background sidekick.

Much of the witty banter of the previous books has gone, and in its place is a more serious, dark tone. While Skulduggery’s endless humour was very amusing in the first two books, making The Faceless Ones into a more serious book benefits the ‘end of the world’ story. The writing style is very similar to the previous books; quite simple, but effective, although I did notice more description than I remember.

While I was quite frustrated with the previous two books for the slight flaws, The Faceless Ones has managed to increase the tension and the realism of the story. The plot is by far the best of the three books so far, and Derek Landy really makes use of the climax, driving the series forward from the stagnant pool it was in before. Quite simply, this is a real improvement on the rather poor sequel that the original Skulduggery Pleasant did not deserve, and The Faceless Ones might even top Skulduggery Pleasant.