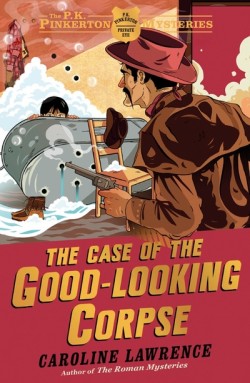 Also known as ‘The Case of the Petrified Man’ in the US.

Business is a little thin on the ground for P.K. Pinkerton, Private Eye. That is, until a distraught negro girl bursts into his office, scared for her life; she has witnessed the murder of her mistress, and the killer is after her. Can P.K. solve the mystery before they find Martha?

Practice makes perfection, as they say, and nothing describes Caroline Lawrence’s latest effort better: the sequel to The Case of the Deadly Desperados, The Good-Looking Corpse is a fantastic novel that whilst aimed at children aged 8+, is a delight to read for anyone (and I have a feeling, gets better as you get older).

I didn’t make it clear in the review of the first novel, but our protagonist, P.K.’s gender is very gender-neutral, and The Good-Looking Corpse only adds to that air of ambiguity, though this time it’s a little more subtle. Lawrence is very clever to be so unspecific; The P.K. Pinkerton Mysteries don’t discriminate between male and female readers like other novels do for the age group, much like her first series, The Roman Mysteries. Without spoiling it, P.K.’s gender is one of the layers that older and more experienced readers will have a better idea of.

Again, Lawrence inhabits her protagonist wonderfully, and the book has a fantastic voice (it is told in first person from P.K.’s point of view, complete with a western twang that really brings characters and settings to life) that makes it a delight to read and easy to imagine. P.K.’s character, with all his/her “foibles and eccentricities” is absolutely fantastic and idiosyncratic; (s)he is convincing and develops throughout the novel. For a children’s novel, there are a lot of secondary and tertiary characters, but they too are all clearly defined, their characters revealed through their actions and dialogue.

I’ve always enjoyed Lawrence’s treatment of faith and religion in her novels; in the Roman Mysteries, she has her main characters meet St Paul the Apostle. The Good-Looking Corpse takes a different approach, introducing us to a Reverend of a Methodist Church. Lawrence is careful not to force any views or opinions down anyone’s throat, however, and any religious themes are dealt with carefully and in a way that is open to anything. Personally, I find her treatment of the “bigger picture” excellent as it exposes children to potentially yet-unheard of viewpoints that will help them to think about what they themselves believe.

Caroline Lawrence is writing some of the best children’s literature available. Well characterised, superbly plotted and fantastically written, The Good-Looking Corpse and the P.K. Mysteries as a whole are novels perfect for any audience, young or old, and will have you engrossed in the Wild West and speaking the ‘lingo as if by nature. Reading the first book isn’t compulsory I wouldn’t miss the opportunity. Apart from the fact that reading a series in order is always better, missing the opportunity to bathe in Lawrence’s delightful world of seven-shooters and saloons is a serious misgiving. Buy this novel for your sons, daughters, grandchildren, nephews and nieces; but most of all, read it for yourself.

More in the P.K. Pinkerton Mysteries: