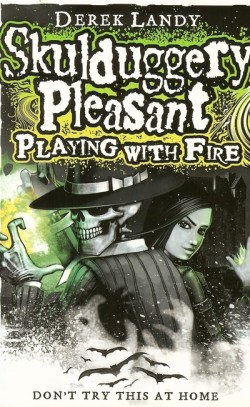 Published: 2008, September by Harper Collins
Genre: action, bildungsroman, fantasy Age: 11+
Synopsis: With Serpine dead, the world is safe once more. At least, that's what Valkyrie and Skulduggery think, until the notorious Baron Vengeous makes a bloody escape from prison, and dead bodies and vampires start showing up all over Ireland. With Baron Vengeous after the deadly armour of Lord Vile, and pretty much everyone out to kill Valkyrie, the daring detective duo face their biggest challenge yet. But what if the greatest threat to Valkyrie is just a little closer to home ...?

The problem with fighting evil is that when you’ve finished defeating one powerful character with Nasty plans, the next one turns up and thinks it’s time for more unrest. It’s been a year since Valkyrie and Skulduggery managed to defeat Serpine, but already trouble is brewing. This time, there’s more to than just troublesome adepts…

Playing With Fire begins with a promising first chapter, full of action and wit, and with a title full of dry humour. This first chapter is very much a reflection of the entire novel: nearly non-stop action, and much humour, not all if which manages to coax a chuckle from me.

I had high hopes for Playing With Fire: while I had many criticisms of the original Skulduggery Pleasant, it was still enjoyable to read. Playing With Fire has expanded the story arc, but in some cases this has been at the cost of the humour aspect of the novel. It is very hard to balance humour and seriousness in a book: while you do want to crack jokes, you also want your readers to take you seriously as a writer. For me, this balance just wasn’t reached, and I felt that there could have been both more seriousness, and humour. Perhaps not more humour- just better humour, as some of the jokes are poor and just don’t manage to make me chuckle. Whilst book two had some great laughs, none of the jokes are as memorable as the ones in the original Skulduggery Pleasant.

That isn’t to say that Playing With Fire isn’t an improvement in other areas: because it is. The relationship between Valkyrie and Skulduggery is getting better and better, although I do wish Landy could have spent more time on this: there is hardly a quiet moment. Playing With Fire is literally packed with one fight after another. The last half of the book is made up of one fight followed by another, and after a while it becomes hard to process. Just like in anything, a book should be a mix of action and more slower-paced moments.

My greatest criticism of the first book was it’s lack of climax: while the story came to s climax, it seemed all to easy. Playing With Fire is very different, and much improved. The climax of this book is far more tense than that of it’s predecessor’s. Landy’s easy writing style also makes this very smooth and a joy to read.

On top of that, Playing With Fire has an improved plot. While book one shows you all the guns and whistles, Playing With Fire expands on this, and needs far less explaining to do. This gives it more time to delve into the plot, and it’s really thick this time, with a multitude of new characters that really broaden the world.

Again, like Skulduggery Pleasant, Playing With Fire is far from perfect. That doesn’t make it a bad book though, and I still thoroughly enjoyed it. Fans will love it, and while I didn’t love it per se, it was a good book. Perhaps not as good as Skulduggery Pleasant, but still an enjoyable read that was worthwhile.