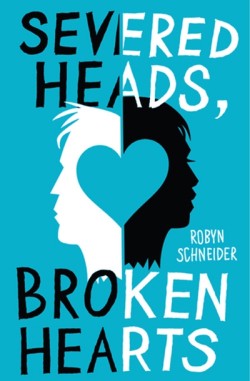 Published: 2013, August by Harper Collins
Genre: bildungsroman Age: 14+
Synopsis: Golden boy Ezra Faulkner believes everyone has a tragedy waiting for them - a single encounter after which everything that really matters will happen. His own tragedy waited until he had everything to lose - in one night, a reckless driver shatters Ezra's knee, his athletic career, and his perfect life. No longer part of the popular crowd, Ezra finds himself at the table of misfits, where he encounters Cassidy Thorpe. Intelligent, effortless and wonderfully weird, she is unlike anyone Ezra's ever met before. Together they discover flash mobs, buried treasure, secret movie screenings and a poodle with a questionable history. But as Ezra dives into new friendships and new love, he is forced to ask: if you've managed to survive disaster, what happens when it strikes again? Robyn Schneider's Severed Heads, Broken Hearts is a lyrical, witty and heart-wrenching novel about how difficult it is to play the part that people expect, and how new beginnings can stem from abrupt and tragic endings.

The bildungsroman has become an increasingly popular genre in YA, particularly after the successes of John Green who has undoubtedly become the name to turn to if you’re in search of a contemporary exploration of teenage life that is both profound and funny. So it’s no surprise that publishers are trying to find the next writer who has as much authority as he does (because apart from the fact that he writes great books, he also sells well!) Robyn Schneider is the latest recruit and Severed Heads, Broken Hearts (or The Beginning of Everything as it’s known across the pond) is her debut – the tale of Ezra Faulkner as he undergoes the fall from high-school goldenboy and jock and in the process learns what true friendship really means.

Severed Heads, Broken Hearts (my preferred title as it conveys some of the absurd wit that abounds the novel) is, comparatively, one of the more Green-esque bildungsromane I have read in recent years. It’s unclear whether this is Schneider’s own voice or if she is trying to emulate what is so enjoyable about Greens but in any case, it isn’t quite as controlled as it needs to be and occasionally misses the mark – to be expected from a young debut author.  A particular example is Schneider’s reference of other media to develop themes and symbols throughout the novel as well as a rapport with her readership – everything from The Dead Poet’s Society to Rushmore to Doctor Who to The Great Gatsby – and eventually, it becomes too much and feels like cheap name-dropping, diluting the power of each reference and overshadowing Ezra’s own coming of age. Likewise, the symbol that does get developed (that of the panaticon) could have been developed a little further in relation to his story.

It doesn’t help that Ezra’s initial (unwarranted) paranoia at being gawked at for his knee injury makes him a very hard character to sympathise with to start with – at times, you just want to slap him and tell him to get a perspective and grow up – though Schneider does address this as part of his character arc. Again, though, it’s treated in a rather ambiguous way and could [improve] if it were done in a more head-on way.

Thankfully though, there’s much good to be said about Severed Heads, Broken Hearts too. Though Ezra takes a little time to get used to, some of Schneider’s secondary characters are cracking. A particular mention must go to Toby, who is Ezra’s firm foundation in his fall from grace and also has a wonderful little character arc of his own – it’s a shame we didn’t get to see more of that. Cassidy, the female lead, I’m less sure about. She’s not at all dissimilar from Green’s Alaska – smart, witty, indie and more than a little self-destructive – but she doesn’t quite get enough page-time of her own to become much more than a manic pixie dream girl (though the end of the novel moves in the right direction.) Still, the emotional climax remains intact and as the novel gains momentum I found myself wanting to stay up longer and longer into the night – and that’s a good indication that Severed Heads, Broken Hearts is a good novel.

Severed Heads, Broken Hearts may not rival some of the genre’s best – but it’s certainly far better than most coming-of-age novels currently being published, and Schneider, with her funny and evocative prose, is a name to look out for. I’m wholeheartedly looking forward to what she brings out in the future as her craft improves and she is able to gain a little more control of her writing.