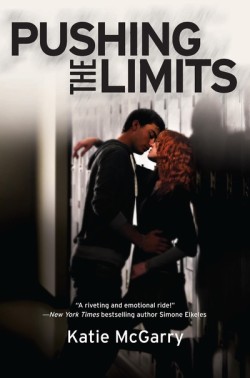 Published: 2012, August by MiraInk
Genre: bildungsroman, romance Age: 14+
Synopsis: They say be a good girl, get good grades, be popular. They know nothing about me. I can't remember the night that changed my life. The night I went from popular to loner freak. And my family are determined to keep it that way. They said therapy was supposed to help. They didn't expect Noah. Noah is the dangerous boy my parents warned me about. But the only one who'll listen. The only one who'll help me find the truth. I know every kiss, every promise, every touch is forbidden. But what if finding your destiny means breaking all the rules? A brave and powerful novel about loss, change and growing up, but most of all love
Watch the book trailer

Academic Echo and stoner Noah are both looking for answers. Echo was broken after her mother’s attempt to kill her, leaving her with horrible scars on her arms, whilst Noah doesn’t want his two younger brothers to share the horrible foster-care experiences he had. The path to hope is a long and treacherous one, but together they’ll succeed in carving better lives for themselves.

You don’t get any prizes for guessing what happens: and the enjoyment in Pushing the Limits isn’t second-guessing the outcome, but journeying with the characters from their distraught roots to something larger and fuller. Pushing the Limits certainly doesn’t start like a feel-good novel, but it’s only right that the novel comes to a sensible conclusion: even someone like me, an advocate for unhappy endings, felt that Noah and Echo had gone through enough without me wishing upon them another tragedy. However, I suspect some of the hardcore unhappy-endists will be a little disappointed by what I think is a very satisfying conclusion.

McGarry is one of the few authors who is able to reel in huge amounts of sympathy from the reader for her characters, even as they mess up and break things: rarely have I wanted two people to succeed as much as I did for Noah and Echo as they try and escape the clutches of their past. There is something strangely hopeful about watching two broken bodies gravitate towards each other in a melee of despair in the hope that they can fix each other. Sadly, there were several occasions during the novel where I felt that McGarry’s characters were being inconsistent and I was forced to suspend my disbelief a little harder than should have been necessary. Not large inconsistencies: just small details such as Echo’s assumption that Noah doesn’t fancy her even though he’s practically got his lips in her hair (another problem I had: they seemed extremely intimate for two characters who weren’t in a relationship or close to one) and character interactions that just didn’t quite make sense.

“Normality” is one of the key themes of Pushing the Limits; the harder and more desperately Noah and Echo strive for it, the further they are. Both want to rewind their lives back to before the catastrophic events that changed their lives occurred, but as the novel progresses a realisation comes upon them that they cannot and never will be able to reach those levels ever again, and instead they must build something new. Sacrifice also plays a large part throughout Pushing the Limits as at varying times Echo and Noah sacrifice themselves for others.

Pushing the Limits is told in the alternating narratives of Echo and Noah, a technique that doesn’t always work but in this case works marvellously, documenting not only their interactions with each other but also revealing the inner turmoil both characters are facing. Of the two, Noah’s chapters were a little more grating, and though McGarry seems to have tried her best to enter the male consciousness, she hasn’t quite managed it and almost overdoes his sexuality; there’re only so many times you can bear to hear him call someone his “goddess”, “siren” or “nymph”.

Pushing the Limits may not start off as a feel-good novel, but it certainly ends on a note higher than it started. McGarry has done well to craft a tale that explores not only the usual topics of love, hurt and anger but also normality and sacrifice. Pushing the Limits bears the message that life is only what we make of it and that sometimes the greatest gift is to sacrifice your own wants and needs for those of others. A flawed but overall fantastic debut.